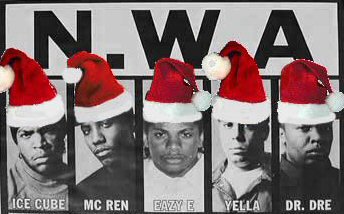 Dumb ho’ said something that made me mad

The War on Chrismas has reached epic stupid proportions. The culturally sensitive and businesslike Mrs tbogg informed me that the CEO of her company sent out an email today that employees should say “Happy Holidays” unless a customer offered up “Merry Christmas” in which case they should reply in kind, and not to make a big deal about it. That seems simple enough.

Even the local paper felt compelled to run run a page 1 article about the general stupidity.

In a pluralistic society, though, some find it troublesome â€“ or unprofitable â€“ to celebrate one religious tradition and ignore others. To quote Meunier, the Macy’s executive: “Our associates are free to wish our customers ‘Merry Christmas or Feliz Navidad or Happy Hanukkah or Habari Gani or Happy Kwanzaa, et cetera’ as appropriate.”

Perhaps it’s safest to say nothing at all. You begin to wish a co-worker “Merry Christmas” when it occurs to you that she may be Muslim. Or Jewish. Or Hindu. Or Buddhist. Or Wiccan. Or an atheist who is in no mood for a greeting with religious roots.

Since 2003, noted Payack, the use of “Merry Christmas” in the major media has dropped by more than 70 percent. Oddly, though, “Happy holidays” is also falling into disuse, declining by more than 60 percent.

You don’t have to be a linguist or a Christian to sense that American customs, language and attitudes are changing. Morris Casuto, the San Diego-based regional director of the Anti-Defamation League of B’nai B’rith, grew up in a devout Jewish home. But his parents insisted he learn about other faiths; young Morris learned that the Christmas season is a time of peace and good will towards all.

A recent encounter, then, startled him. A man called the ADL to complain about the many Americans who hesitate to wish others “Merry Christmas.”

“The next person who says ‘Happy holidays’ to me,” the caller told Casuto, “I’m gonna punch him in the nose.”

…and on that note.

Which reminded me of this:

It was Christmas in prison
and the food was real good
we had turkey and pistols
carved out of wood
and I dream of her always
even when I don’t dream
her name’s on my tongue
and her blood’s in my stream.