Goddamit. I’ve only got three more years to land a judgeship… 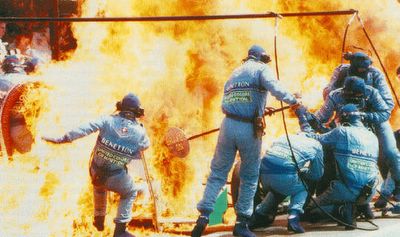 Except for a small glitch, things are going pretty darn well

We don’t think that John Hinderaker is nuts, or at least institutional-worthy hustle-the-kids-out-of-the-room nuts, we do think that he must be bucking for some kind of lifetime appointment because not even the suck-ups over at The Corner thought much of Chimpy Goes To Annapolis. Here is Hinderaker:

President Bush’s speech at the Naval Academy today was a brilliant exposition of his strategy in Iraq and in the war on terror. It was thematically similar to a number of other excellent speeches he has given over the past four years, many of which we have quoted and linked to, but it included a more detailed analysis of the progress of Iraqi units in taking over the defense of their country than we have seen before. It is a little-known fact, I’m afraid, that, in a series of speeches extending over a period of years, President Bush has articulated his policy vision more consistently and more eloquently than any President since Lincoln.

First we will note that RocketBoy had to go all the way back to Lincoln to find a great speechifier, thereby, as John Leo might put it, “totally dissing” the Great Communicator Ronald Reagan. No Christmas Holiday card for you from Peggy Noonan this year, John.

Secondly we have to wonder why, if George Bush is articulating “his policy vision more consistently and more eloquently than any President since Lincoln“, the polls on both George Bush and the war are going down faster than Ken Mehlman backstage at Thunder Down Under?

The Rocket provides the answer:

His speeches have, for the most part, gone unheard, unread, and uncovered by the mainstream media.

Yeah. I haven’t ever heard of any of his speeches being discussed in the MSM but that shouldn’t be the problem since we all know that all well-informed people get their current event fixes from the blogs who have all been strangely silent about Bush, his speeches, the war, and other shit like that.

But wait! It appears that Bush’s speeches before miltary prop soldiers have been carried in the past by the Mainstream Media:

Clear, confident, substantive. There was nothing in it that we and our readers didn’t already know, but the message is one that many rarely hear. And the networks all carried it after all. That’s good; President Bush nearly always does well when people see him, instead of seeing Democrats talking about him, as they will on the evening news.

The only thing I thought was odd was the unnatural quiet in the hall. It was like the audience at a Presidential debate, which has been cautioned not to express approval or disapproval. Only at the end, apparently, were the soldiers permitted to applaud.

The touch of emotion at the end was genuine and powerful. His appeal to Americans’ pride and determination resonated, no doubt, with many who haven’t spent much time understanding the strategic underpinnings of the conflict.

Again, one is left to wonder why, if the President always does well when people see him, and the speech (from June of this year) resonated with the fence-sitters, why support for the war is dwindling?

In John Hinderaker’s world…it’s a mystery.