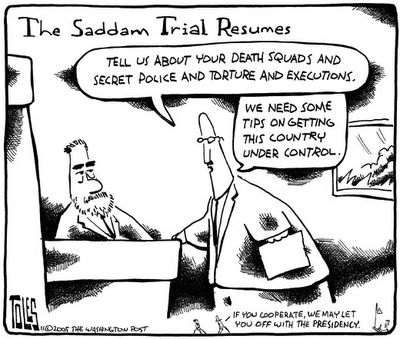 (courtesy of the WaPo)

Who knew that when we said we wanted to make Iraq more democratic, we meant allowing everyone to torture and murder:

As the American military pushes the largely Shiite Iraqi security services into a larger role in combating the insurgency, evidence has begun to mount suggesting that the Iraqi forces are carrying out executions in predominantly Sunni neighborhoods.

Hundreds of accounts of killings and abductions have emerged in recent weeks, most of them brought forward by Sunni civilians, who claim that their relatives have been taken away by Iraqi men in uniform without warrant or explanation.

Some Sunni men have been found dead in ditches and fields, with bullet holes in their temples, acid burns on their skin, and holes in their bodies apparently made by electric drills. Many have simply vanished.

Some of the young men have turned up alive in prison. In a secret bunker discovered earlier this month in an Interior Ministry building in Baghdad, American and Iraqi officials acknowledged that some of the mostly Sunni inmates appeared to have been tortured.