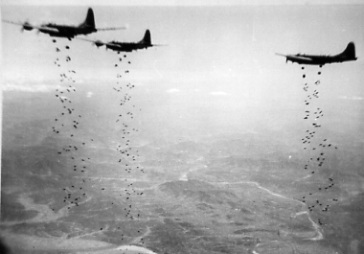 Citing the success of pro-war film The Passion of the Christ, the Hollywood editors of Open Robe Media are engorged with warlust and, since they have their finger on the pulse of the American heartland after flying over it two weeks ago to get sloppy drunk in New York, they think the time is right for a rah-rah all-American Mission Accomplished movie:

Die Hard star Bruce Willis is taking on two Hollywood traditions in his attempt, reported by the Timesonline Sunday, to make a pro-war feature film about United States involvement in Iraq. Willis is bucking a nearly unbroken skein of Tinseltown anti-war films that goes back to such Vietnam era favorites as Coming Home and Platoon. And the actor is doing it not with mainstream media source material, but basing his movie on the reporting of a blogger – former Green Beret Michael Yon. Chosen by Willis for his story is Yon’s on the scene reporting of the heroics of the Deuce Four unit in Mosul, Iraq.

As Hollywood insiders would tell you, however, despite the participation of a bankable star, the film is still far from making it to the silver screen. Nevetheless, blogs are weighing in heavily in support of Willis, and of Yon, as if the movie were already a fait accompli. Betsy’s Page has praise for Yon and wishes Willis luck. Captain’s Quarters sees the potential movie as an antidote to the “idiotic Constant Gardner.” The Bernoulli Effect wonders if its the next The Passion of the Christ. PJMedia’s RogerLSimon also sees box office gold, if the film is made, and relates its potential to a poll in the Washington Post. And The Minefield is just plain “excited!”

Little word so far from liberal blogs that are probably hoping the project dies in what is known in Hollywood as “Development Hell.”

Well it would be unkind of us to wish that it dies in “development hell” since it already comes with a deathwish of it’s own in the name of Bruce Willis who is a decade past his action hero days…unless you’re one of the few, the proud, the couldn’t get into the movie you really wanted to see, and saw Hart’s War or Tears of the Sun.

And Jeebus knows that the American public is just clamoring for flag-waving war movies like The Great Raid which pulled down a whopping $10 million at the American box office; not that the folks who green-light movies take such things into account. But Captain Cubicle gives it a thumbs-up because it’s not like non-war movie The Constant Gardener and Roger “Scenes From A Mall” Simon sees “box-office gold” which kind of speaks for itself, so if the movie doesn’t make it to the screen it’s because Hollywood is objectively pro-terrorist and hates it when movies make lots of money like Saving Private Ryan

On the other hand, they could get Jason Apuzzo to direct and that guy who wrote Scooby Doo to write the screenplay.

I smell a hit.

Well, I smell something…