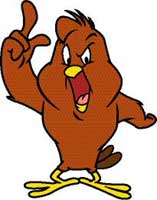 Jason Mattera, who is fighting for the culture because it doesn’t entail danger or death or doing anything that might make him piddle his pants, takes down an obscure professor and proceeds to do his wardance:

Warren County Community College adjunct English professor, John Daly resigned last night before the school’s board of trustees began an emergency meeting to discuss the professor’s fate. On November 13, Daly sent an email to student Rebecca Beach vowing “to expose [her] right-wing, anti-people politics until groups like [Rebecca’s] won’t dare show their face on a college campus.” In addition, Daly said that “Real freedom will come when soldiers in Iraq turn their guns on their superiors.”

Daly’s email to Rebecca came after she sent a note to faculty announcing the appearance of decorated war hero Lt. Col. Scott Rutter to discuss America’s accomplishments in Iraq.

Young America’s Foundation will continue to monitor and expose similar instances of leftist intolerance through our online service, “Activist 411 – Activism Made Easy.” This resource helps students, like Rebecca Beach, by providing them with advice on how to advance conservative ideas effectively and reveal intolerant professors, administrators, and other left-wing elements who attempt to intimidate and silence young conservative activists.

Ooooooo. Jason nailed an adjunct English professor at a JuCo. He’s the Sgt. Fucking York of the War On Terror That Doesn’t Include Actual Fighting or Danger (WOTTDIAFOD).

You may remember Jason from this memorable exchange:

Here at HARDBALL, we salute everyone at every age getting involved in politics, obviously. So, we brought together two young leaders to tell us what they think of politics today. Chris Galloway is president of the Young Democrats of America. And Jason Mattera is the spokesman for the Young Americaâ€˜s Foundation, which is a conservative group.

MATTHEWS: And how old are you, Chris Galloway?

Let me ask you aboutâ€”both you gentlemen, but starting with you, Jason. What are you guysâ€”what do people your age think about the war in Iraq right now, as it is going, as weâ€˜re fighting this to try to get the Iraqis to take over the fighting? Whatâ€˜s the view of your group?

MATTERA: I think my group is supporting President Bush on this matter. Weâ€˜re looking to defeat the terrorists.

MATTHEWS: Where? In Iraq.

MATTERA: In Iraq. Of course in Iraq.

And thereâ€”you wonâ€˜t see on college campuses, as you did in the 1960s, these rampant protests, these obstruction of classroom, theseâ€”the book burning, everything that went down. I think kids are more conservative today. And I think groups such as the Young Americaâ€˜s Foundation help thatâ€”help mold that conservatism.

MATTHEWS: No, Iâ€˜m just asking a particular question. Would you like to enlist in this war?

MATTHEWS: Well, what kind of people should fight in this war, if not you?

MATTERA: Those who want to, those who wantâ€”who feel the desire, who have the passion to go over to Iraq. I have many friends who are in Iraq myself, people from my church, people who I graduated with.

MATTERA: They went to go fight over there. Iâ€˜m here. Iâ€˜m fighting

MATTHEWS: Paul Hackett, a Democratic candidate for Congress who just lost that close election in Ohio, referred to the president as a chicken hawk, somebody who supports war, but doesnâ€˜t fight it. What do you think of that phrase, chicken hawk?

MATTERA: Because it doesnâ€˜t fit. I donâ€˜t think President Bush…

MATTHEWS: It means you talk hawk, but you act chicken.

MATTERA: Yes, I understand that, but I donâ€˜t think that President Bush is a chicken hawk.

Laugh all you want monkey-boy, Jason has popped his cherry and now he’s a made man.

Well, maybe “man” is too strong of a word, but you get the idea….