And Tarek Ayoub is Still Dead 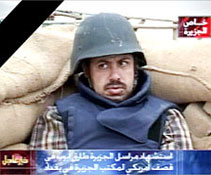 BradBlog has an amazing clip from Channel 4 in the UK on the memo that purportedly has Bush telling Tony Blair he wanted to bomb Al-Jazeera. They assert that the reason journalists are being threatened with the Official Secrets Act for the very first time is because the White House is putting pressure on Blair et. al. to keep the memo under wraps, and speculates that there are other things in the memo that the US doesn’t want to come out.

“Well it does seem to me a very draconian threat and it leads one to the suspicion that the anxiety here is not so much the national interest but preventing the government from embarrassment. After all the events with which we are concerned took place some considerable time ago. Why is it necessary to invoke the terms of an act designed to deal with issues which arise in a time of national emergency?”

There is also an interview with Clive Stafford-Smith, who represents Al-Jazeera cameraman Sami al-Hajj, who was seized while traveling to Afghanistan on assignment and has been held in Guantanamo Bay for four years without being charged. In recently declassified documents, Stafford-Smith says that al-Hajj has been questioned 130 times, and 125 of those times they tried to get him to admit that Al-Jazeera was a terrorist front funded by Al Quaeda.

So far neither Downing Street nor the State Department have responded to Al-Jazeera’s inquiry about whether this is just one of Bush’s “jokes” or not. Since the entire Arab world we are so anxious to “democratize” is waiting to hear exactly what’s up with all of this, it seems like something Karen Hughes might want to big foot her way over and get right on.

Meanwhile, the Power Tools have put on the Schutzstaffel regalia again and are marching around in circles singing Kampflied der Nationalsozialisten as they celebrate this ugly disgrace of an article in the New York Sun cheering on the bombing of Al-Jazeera.

God it must get nasty when everyone wants to be Himmler.

And Tarek Ayoub is Still Dead