Cry Me a River 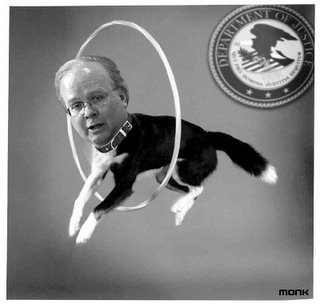 You’ve got to hand it to Michael Isikoff and his tireless efforts to try and make the most unsympathetic man in the world — Karl Rove — look almost human. Even on Thanksgiving, he picks up pen in weary hand to let us know that Karl, poor Karl, had to take out a $100,000 line of credit to pay his mounting legal bills.

According to the Center for Public Integrity, the average net worth of the individual members of the Bush cabinet, including the President and Vice President, was between $9.3 and $27.3 million in 2002. That’s nearly ten times that of their counterparts in the Clinton administration.

On the richter scale of genuine newsworthiness, I’d say Rove’s loan rates just below Nick and Jessica’s split. I am certain that there will no doubt be a fat, healthy Rover defense fund fueled with endless supplies of blood money should the need arise.

Of far more worth is the fact that there is no free speech in America, at least not in that little patch of land known as Crawford, Texas, where Daniel Ellsberg and Cindy Sheehan’s sister Dede Miller were arrested yesterday in defiance of a new ban that makes it illegal to camp or park within 7 miles of His Imperial Highness.

Today I’m thankful that there are still people in this country ready to put themselves on the line to challenge Karl Rove and everyone else who thumbed through a copy of Orwell’s “1984” and said “hey cool, you know I bet that would work.”

(thanks always to Monk at Inflatable Dartboard, whose superlative graphics are always a source of inspiration)

Cry Me a River