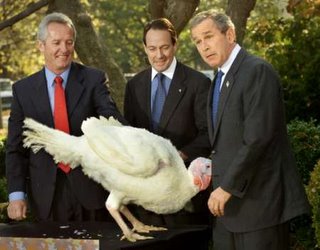 Some days, the stories just seem to fall in your…um…lap. And some days, it’s a turkey. Ahem.

No turkeys for Froomkin today — the man is on fire. Bush’s poll numbers are down, the public doesn’t trust him, and Froomkin gives Waas’ latest article some good coverage. Plus, Wolf Blitzer can be hilarious. What’s not to love?

Congressman Murtha is blogging on HuffPo today. Looks like his positive response is outstripping the negative by a wide margin.

Oh, and the American Prospect says that the Bush Administration really doesn’t want peace in Iraq.

Today Andrea Mitchell reported on MSNBC that the Administration had a lot more “nuance” in the PDB than they told the public about in the run-up to the war. Why does Andrea Mitchell call our Preznit and Darth Cheney liars dissemblers? (Because the evidence is forcing her to do so? Ahem.)

It’s snowing here, and I’m baking pumpkin pies for tomorrow. Music of choice: The Carols of Christmas. For all the FDL readers who will be out of town for the festive feasting, have a wonderful Thanksgiving. For all of the rest of you, hang on — it’s a news-filled festival today. More to come…

(Picture courtesy of Dependable Renegade. Thanks to reader dubhaltach for the link.)

UPDATE: Oh…*snerk*…hahahahahahaha. Just read the first part of this.