What Did He Know and When Will He Know It? 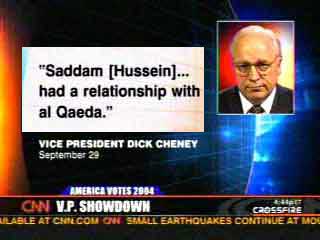 According to a new article by Murray Waas, both Preznit Gung Ho and Big Time received information in a classified Presidential Daily Brief (PDB) 10 days after the 9/11 attack on the World Trade Center that there were no ties between Saddam Hussein and Al Quaeda. Its existence was not disclosed to the Senate Intelligence Committee until the summer of 2004, and the administration has steadfastly refused to turn it over since then despite demands from both sides of the aisle.

So why was any Bushbot with a pulse screaming about Al Quaeda’s ties to Saddaam during the ramp up to war?

One reason that Bush, Cheney, and Rumsfeld made statements that contradicted what they were told in CIA briefings might have been that they were receiving information from another source that purported to have evidence of Al Qaeda-Iraq ties. The information came from a covert intelligence unit set up shortly after the September 11 attacks by then-Undersecretary of Defense for Policy Douglas J. Feith.

That’s just ducky. One of the only bright moment in Bob Woodward’s otherwise slavish Plan of Attack comes when Gen. Tommy Franks calls Feith “the fucking stupidest guy on the face of the earth.” This would of course be the same Doug Feith whose prewar intelligence activities the Pentagon’s inspector general is now investigating.

I’m gonna go out on a limb here and say this might qualify as intelligence the President had that the Democrats didn’t have when they voted to authorize the war. They’re still a bunch of sheep in my book, but it doesn’t make BushCo.’s attempts to re-write history (that’s right, suck it up, Dick) any less egregious.

What Did He Know and When Will He Know It?