Toto’s Nemesis Bending Over Backward to Save Own Political Ass 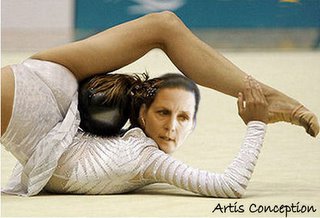 Oops. When you attribute a quote on the floor of the House to a fellow Republican, apparently you’d better get it in writing first.

Danny Bubp, a freshman state representative who is a colonel in the Marine Corps Reserve, told The Enquirer that he never mentioned Rep. John Murtha, D-Pa., by name when talking with Schmidt, and he would never call a fellow Marine a coward….

And maybe she should…um…be a little less deliberately…erm…obtuse. (Or stop lying. You pick.)

It’s unclear whether Schmidt, who will start her 79th day in the House today, knew at the time of her remarks that Murtha had served 37 years in the Marine Corps and Marine Corps Reserve.

She immediately took back her remarks. It’s against House rules to refer to a fellow lawmaker by name or to criticize them.

Schmidt, a Republican from Clermont County’s Miami Township, then wrote to Murtha to explain that she has a lot to learn and did not mean to disparage his service.

Yes, I can certainly see how calling someone a coward in the well of the House of Representatives on national television isn’t meant to disparage their character or that of their political party. Ahem.

Murtha is taking the high road.

Murtha, a lawmaker since 1974 and a Vietnam veteran who received a Bronze Star and two Purple Hearts, said Sunday on NBC’s “Meet the Press” that he doesn’t hold Schmidt responsible.

“This is a new member, and sometimes they give her something to say that … they get out of hand. I try not to take this stuff personal,” he said.

Hmmm…smarmy political tactics or decent guy trying to do what he feels is right for his country and the soldiers who serve it? Well, not really a choice for me. Let’s hope the rest of America is waking the hell up.

For more on Murtha’s statements and the aftermath, the AP has a quick follow-up piece.

And the NYTimes has even more.

Howie Kurtz has more on the smarmy politician tactic of smearing via a straw man in today’s Media Notes Extra.

Josh Marshall cracks me up. As does Roger Ailes (the good one), who makes a very good point — Toto’s nemesis participated in an anti-Murtha event the night before and, unless she had a frontal lobotomy in between, had to have known that Murtha was a former Marine.

Poor Mean Jean. All that contortion for nothing.

UPDATE: Crooks and Liars has some hilarious video up of Mean Jean when she was running against Paul Hackett. Definitely worth a watch.

UPDATE #2: Ooops — as reader Steady Eddie points out, it was Josh who made the prior night anti-Murtha event point, not Roger. My bad. Never copyedit while watching an Elmo video with your toddler.

Toto’s Nemesis Bending Over Backward to Save Own Political Ass