I’ll Take Dick Cheney in the Bathroom With the Defibrillator 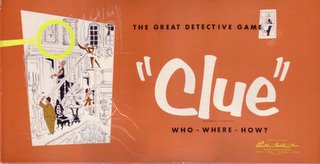 Bob Woodward’s “Mr. X” may or may not be the first administration official who leaked Valerie Plame’s identity to a member of the press — it is still not known who the journalist was who was contemplating an article on Joe Wilson that made him decide to go public with his own story first. But by most accounts these four candidates are the front runners as Woody’s leaker, so place your bets now, ‘cos the lid could blow off this pig any day:

George W. Bush: Argument For: Woodward’s source was someone he interviewed at length for his book, Plan of Attack. He definitely interviewed Gee Dubya, though the book says his interview took place in December 2003. The possibility that he was doing “background” interviews earlier on, however, still exists. The WaPo claims that “Mr. X” has testified in the Plame matter but Reuters says he has not appeared before the grand jury — Bush fits the bill on both counts. Undersecretary of State Marc Grossman gave a briefing on Wilson at the White House on June 11 or 12, Walter Pincus’s article in the WaPo appeared on the 12th, and Woodward said he spoke to his source a few days after the Pincus article. So Bush definitely had access to the information by that time. It could also explain Patrick Fitzgerald’s odd appearance at Bush’s lawyer’s office.

Argument Against: As Atrios would say, God does not like me that much.

Dick Cheney: Argument For: Knew by the time he told Scooter Libby on the 12th that Wilson’s wife worked in counterproliferation. Spoke to Woodward for Plan of Attack, though he did it on background, so a confidentiality agreement would cover him. Definitely had both the motive and the malice. Has recently dispatched anonymous gremlins to issue peculiar denials in the press. Also testified but not before the grand jury. CIA hates him just enough to out Woodward prior to Libby’s indictment and fuck him up.

Argument Against: On Larry King, Woodward all but cleared him, saying he did not talk to meet with him during the time in question. Hard to imagine the word “casual” applied to Dick Cheney.

Richard Armitage: Argument For: Possibly had access to INR memo during the time in question. Known to have been one of Woodward’s sources for Plan of Attack. No record of having appeared before the grand jury. Hasn’t issued a denial.

Argument Against: Didn’t have any axe to grind against Wilson, wouldn’t have been party to any OVP/Rove conspiracy. According to this article, didn’t have the INR memo until after Wilson’s op-ed piece. If Michael Isikoff is right and Woodward’s source is Novak’s source it ain’t Armitage, ‘cos the idea of him shooting the shit with the Prince of Darkness just stretches all credibility. And God, at the moment, does not appear to like the GOP quite that much.

Stephen Hadley Argument for: Coordinated disinformation related to Niger uranium for the White House, including Tenet’s self-flagellation. Putative point man for the smear campaign, received Rove’s email about Cooper conversation. No record of testifying before the grand jury. Told friends he thought he was going to be indicted. Weird non-denial in Korea. Recently promoted, a sure sign of guilt within the Bush administration.

Argument against: Given how eagerly Bush distanced himself from Rover when it looked like he would be indicted, hard to imagine him embracing Hadley as furiously as he is at the moment if he thought he was guilty. And whatever involvement Hadley had doesn’t seem to have been of the “lone wolf” variety.

(special thanks to Valley Girl for the Clue graphic)

I’ll Take Dick Cheney in the Bathroom With the Defibrillator