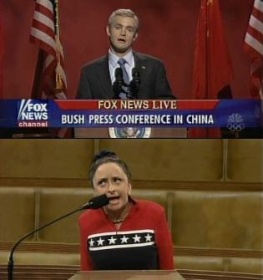 Has the American public finally reached the tipping point? Was a burly Pennsylvania Congressman with a long history of service to his country and a simmering disgust at this Administration’s treatment of the military all it took to ignite a firestorm of discussion on the Administration’s incompetent prosecution of the Iraq War?

Or has this been simmering for quite a while?

As friends describe it, Rep. Jack Murtha of Pennsylvania had been searching his soul for months, seeking guidance on what to do in Congress about Iraq. “I think he was going through what we Catholics call a ‘long night of the soul’,” said Rep. Rosa DeLauro of Connecticut. In 1974, Democrat Murtha had become the first Vietnam veteran elected to the House. A decorated Marine from the mountainous “Deer Hunter” country east of Pittsburgh, he had always been a down-the-line hawk and a favorite of the Pentagon generals….

Murtha was the one-man tipping point. Initially a strong supporter of the conflict, he had voted for it and the money to pay for it. But on his last trip to Iraq, he had become convinced not only that the war was unwinnable, but that the continued American military presence was making matters far worse. “We’re the target, we’re part of the problem,” he told NEWSWEEK. Back in Washington, he resumed his weekly pilgrimage to Walter Reed Army Medical Center, visiting severely wounded casualties in rehab and agonizing over what he saw there. “I think those visits affected him deeply,” said DeLauro. In a long chat with an Irish colleague, he talked about his congressional hero and mentor, another blue-collar Irishman, Thomas P. (Tip) O’Neill. No liberal on defense, in 1967 O’Neill had stunned President Lyndon B. Johnson by telling him that the Vietnam War had become a lost cause. Now, Murtha mused, it was his turn to confront a president with harsh truths.

It’s too bad this President, and his coterie of cronies, seem to be impervious to anyone speaking the truth to them.

War-room spinners also hope to highlight whatever good news there is to be found in Iraq, and which, they say, doesn’t make its way into the American media. They recently dispatched one of their best operatives, Steve Schmidt (no relation to the Ohio congresswoman), to Baghdad to look for ways generate positive press. His answer: build better relations with the reporters. But they may be preoccupied these days by the need to dodge terrorist attacks on their hotels.

It’s a bit hard to report on good news from Iraq, when you aren’t even safe in your Green Zone hotel room, let alone able to get out into the country to report on a story without a substantial military escort for fear of being kidnapped as a hostage in Bushie’s War. Seems to me someone needs a dose of reality, and he lives in the White House.

Whether we’ve reached a tipping point remains to be seen. But it sure does feel a whole lot like things are slipping out from underneath the Preznit’s control. Rove is off his game (a bit distracted much?), and no one else has stepped in to adequately fill that void.

When you have to deploy Bushie as your front line defense attack dog, you know you are hurting. But who else do they have these days — that isn’t under indictment, suspician of indictment, or involved in the investigation of something that may lead to indictment? The words “reap what you sow” leap to mind today.

And as a Monday treat, if you missed Saturday Night Live this weekend, Crooks & Liars has some video up that will make you laugh until you cry. Oh, man. I needed it today. C&L rocks.

(Graphics love for the split screen shot to Crooks and Liars, from Saturday’s SNL.)