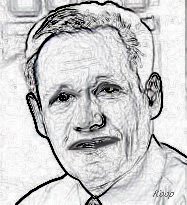 Bob Woodward managed to jam his giant ego into Larry King’s tiny studio tonight to answer a few simple questions. To say that he did not dazzle before the cameras would be too kind. He really gave Sulzberger a run for the title of Bang Bang the Idiot Boy. One can see why he is always being called out of the White House steno pool by the BushCo. brass — he will most assuredly take down everything faithfully, and never be quite smart enough to know what it all means.

Larry actually pressed him a couple of times, and Woody floundered. Larry showed the now-famous clip of Michael Isikoff pushing him about a “bombshell” story he was sitting on the night before the Libby indictment:

KING: In retrospect, Bob, could you have said on the show that night, Well, to you and your viewers, I do have some information, I’m working on it, something was said to me, but I can’t reveal it. That would have covered this whole thing.

So Bob can’t tell the truth because Larry might ask him about it. Journalistic integrity. Highly overrated.

WOODWARD: Yes. I think I was a little hyper and a lot of pent-up frustrations, bad night. And as you have pointed out a number of times, I tend to be very neutral, overly neutral…

I think the word you’re hunting for is “dumb,” Bob.

WOODWARD: And so there is this moment when I realized I have a piece of something. I truly don’t know what it means. But then I go in a mode where — actually some people said, you know, “Why did you do this? Why not stay out of it? Why get involved?” And all of the juices — my wife, Elsa, told me this, that she could almost hear it, the reporting news juices running.

The necessity for talking about one’s running juices on national TV escapes me, but be that as it may, Big Thick Bob has convinced me he didn’t know he had something until Fitzgerald’s press conference. But once he realized he had the first leak and was only a few phone calls away from being back in the spotlight again, I’m sure poor Elsa suddenly was knee deep in Woody’s effluvium.

KING: How did it even come up?

WOODWARD: Came up because I asked about Joe Wilson, because a few days before, my colleague at the “Washington Post,” Walter Pincus, had a front page, saying there was an unnamed envoy — there was no name given — who had gone to Niger the year before to investigate for the CIA if there was some Niger-Iraq uranium deal or yellow cake deal.

This is key, because it’s the first indication there has been about when exactly Woodward spoke to his source. Pincus’s article on Niger uranium came out on June 12, 2003 but it did not disclose Joe Wilson’s identity. Libby had first learned that Joe Wilson’s wife worked for the CIA in late May or early June, and prior to the June 12 article being printed Pincus had contacted Cheney’s office for comment.

On June 11 or 12, however, Under Secretary of State for Political Affairs Marc Grossman held an oral brief at the White House for a larger group of people. I’ll let my esteemed colleague emptywheel explain the significance:

Now, there are two groups of people we know were privy to information on Wilson here (there may be more). The first is a group at OVP–the people who discussed how to respond to Pincus’ inquiry about Wilson’s trip and those who knew enough to write “Wilson” on their CIA dossier; for them, this information is almost certainly tied to the context of a malicious Get Wilson campaign. Then, there’s the group that attended the White House meeting; for these people, information on Wilson might be less malicious, tied to the larger question of the problem with the Niger claim. Both groups include Libby, but the latter group would almost certainly include Hadley, who is reported to be Woodward’s source, as well as people like Rove and Condi.

So the list of suspects becomes much longer now that we know the date that Woodward first talked to his source, and stretches from Cheney’s office to Rove, WHIG and the rest of the Bushbots.

KING: What would you have done if the source had said, “Don’t tell him,” and you were subpoenaed to deposition? Would you refuse?

WOODWARD: That is a situation I have not had to deal with in this case. But of course, when I went into my aggressive reporting mode, I didn’t know exactly what was going to happen.

Now, if I hadn’t done that, and the source had said, “Keep quiet; it’s confidential,” then the special counsel in this case, Fitzgerald, wouldn’t have known, I guess, and I would have stayed out of it.

Right, Bob. Scooter Libby’s being charged with perjury because he said he thought he told reporters he had heard it from other reporters, even though the reporter he says he thought he heard it from (Russert) says he didn’t. So Woodward’s notes say that he might have asked Libby about Plame, and this on June 23, possibly before he talked to any reporter and certainly any other than Judy Miller that we know of.

What, exactly, are the chances that Libby’s lawyers are not gonna subpoena the only journalist who potentially told him about Plame’s identity? Bobby’s secret would have come out one way or the other, if Scooter is planning any sort of defense short of insanity. And I’ll bet that’s how Bob twisted Mr. “X’s” arm, which it sounds like he most assuredly did, journalistic privilege be damned.

Whoever Mr. X is, Woody wasn’t gonna do any jail time for him.

WOODWARD: Because I was focused on getting the book done. You know, the significance of this is yet to be determined. And what’s the good news in all of this is, when it all comes out — and hopefully it will come out — people will see how casual and off-hand this was.

I made the comment yesterday that the leakers had played Bob like a two dollar banjo, but I think it must have been an incredibly frustrating process for them. Because sadly, I don’t think Bob did understand the significance of what they were telling him. Matt Cooper tipped to it instantly, but whoever told Woody was just a smidge too “casual” about it and dogged, simple Bob just didn’t get what was going down. Still doesn’t.

Can you see Cheney picking up the paper every morning, riffling through it and muttering “fucking Woodward, where is the damn thing?”

The rest of the interview was just pathetic. At one point Woodward was reduced to holding up old headlines from the Washington Post to show us how valuable his reporting had been. (As Bob Adams said in the comments, “he’s gonna get ‘rhoids if he keeps pulling Nixon out of his ass.”)

You know, I truly do believe this whole uproar has shocked Woodward. He doesn’t get it. He thought he was going to be the hero. Even Larry asked him if he was being “used” by the administration — Bob just looked befuddled. He seems to believe that whatever price he paid for access to an otherwise impenetrable administration has been worth it, with no notion that he has turned into a complete tool.

We can assume his access to BushCo. for the purpose of finishing his new tome will continue unabated.

Clarification: When I said Bob didn’t “know” he had anything until Fitzgerald’s press conference, I don’t think he necessarily knew he was the first (potentially) to be leaked to until then. I still think that the wheels were set in motion the week prior that lead to Bob’s sudden willingness to come forward. But I think it didn’t occur to him until he heard Fitzgerald speak that there was a chance for him to step back onto the stage with a big, dramatic flourist that would resurrect his Watergatian glory. We presume there was nobody around him to tell him in truth he would wind up the goat.