Twenty years ago? Were the films in color then? 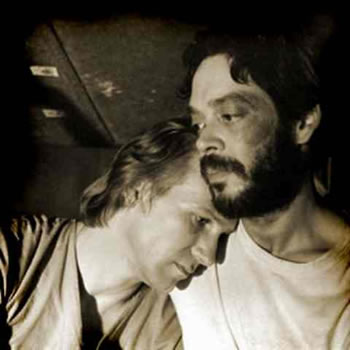 There’s something about William.

Caryn James in the NY Times on playing gay:

This season she might have added: playing gay. There has been an explosion of Oscar-baiting performances in which straight actors play gay, transvestite or transgender characters. Philip Seymour Hoffman melts into the role of the gay title character in “Capote,” while Cillian Murphy plays a transvestite in 1970’s Ireland in Neil Jordan’s witty, endearing “Breakfast on Pluto.” Jake Gyllenhaal and Heath Ledger play lovers in “Brokeback Mountain” (set to open Dec. 9), already better known as “the gay cowboy movie” and already a Letterman joke.

But big-name actors are leaping into such roles in smaller films, too. Felicity Huffman stretches way beyond “Desperate Housewives” as a man about to become a woman in “Transamerica” (Dec. 2) and Peter Sarsgaard plays a gay Hollywood screenwriter who has an affair with a closeted, married studio executive (Campbell Scott) in the current “Dying Gaul.”

It’s this cluster of sexually different roles that is new, not the idea itself. These actors are simply following the Oscar-winning path set more than a decade ago by Tom Hanks as a gay man with AIDS in “Philadelphia,” followed by Hilary Swank as the cross-dressing heroine of “Boys Don’t Cry” and Charlize Theron, whose role in “Monster” was a kind of award-baiting triple-whammy: she gained weight, wore fake teeth and played a lesbian. With evidence that they will be rewarded for such stretches, and with a public now accustomed to seeing gay characters in movies and television shows like “Will & Grace,” big-name actors seem eager to take these roles.

I guess you could say that Tom Hanks paved the path if you ignored William Hurt in Kiss of the Spider Woman (1985), Peter Finch in Sunday, Bloody Sunday (1971…okay. He didn’t win), and Peter O’Toole in Lawrence of Arabia (1962. He didn’t win but the movie did).

I’m sure that David E. could provide more examples that flew under my radar. Personally I think George C. Scott went a little too butch in Patton (1970) but that’s just me.

I
swear
to
God.

I should have scalded him with a vente double non-fat decaf dumbassachino. No foam…