Joseph McCarthy died for our sins 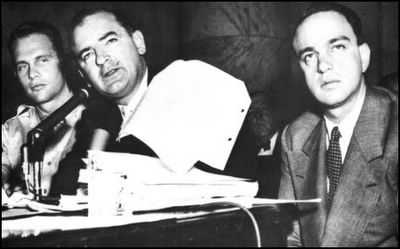 Ruining it for the rest of us…

Part of the problem is the legacy of our domestic history during wartime. Because most Americans view the U.S. internment of the Japanese during World War II as gratuitously punitive, unnecessary, and illegal, any proposal to monitor particular American subgroups today calls down swift denunciation as the moral equivalent of that internment. Moreover, though the McCarthy period was not, properly speaking, a witch huntâ€”no witches haunted Salem, but plenty of communists sympathetic to the Soviet Union moved in and out of the U.S. government during the fiftiesâ€”it matters little. The abuses by anti-communist watchdogs have become enshrined in our collective memory as something we must never repeat. It is now a staple of our history books that the House Un-American Activities Committee was almost more pernicious than 7,000 Soviet nuclear missiles pointed at the U.S. Consequently, we have since believed it better to err on the side of civil liberties than on the side of national security, should the two conflictâ€”at least until September 11.

…and thank goodness that 9/11 happened. Because without it we might never have shaken off the shackles of restrictive ‘civil liberties’ and again pondered the extreme usefulness of stripping people of their property and holding them in camps until the “all clear” is sounded, or, at the very least, hounding them, smearing them, and destroying their livelihoods.

Next week: The Difficulties of Lynching In A Post-Emmett Till World.