How Did the Cat Get Out of the Bag? 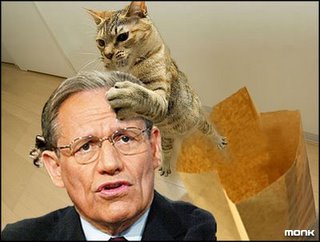 Len Downie appeared with Howard Kurtz this morning on CNN (Crooks and Liars has the video). It was the first time I heard anyone mention the exact date Bob Woodward came forward and told Downie about his role in TraitorGate: October 24, 2005 according to Downie.

In the final weeks before the grand jury indicted vice presidential aide I. Lewis (“Scooter”) Libby on Oct. 28 for perjury and obstruction of justice, Woodward says he was asked by Downie to help report on the status of the probe.In the course of his reporting, Woodward says, “I learned something more” about the disclosure of Plame’s identity, which prompted him to admit to Downie for the first time that he had been told of Plameâ€™s CIA job by a senior administration official in mid June 2003.

Well of course in Bob’s version of just about anything it’s All About Bob. But what are the odds that this “revelation” didn’t come as the result of Bob’s incredible sleuthing, but in fact was related to what was happening in the news? So I decided to go back to October 24 and take a look at what happened on that day, and I went “oh shit…”

WASHINGTON, Oct. 24 – I. Lewis Libby Jr., Vice President Dick Cheney’s chief of staff, first learned about the C.I.A. officer at the heart of the leak investigation in a conversation with Mr. Cheney weeks before her identity became public in 2003, lawyers involved in the case said Monday.

It was a bombshell that shook everyone, the first indication the public had that there was hard evidence that this whole thing led back to the Vice President.

It appeared online on Sunday night, October 23, for the Monday edition of the NYT. Oh was there some celebrating in blogtopia that night, remember? (NB: Swopa in the comments notes that it appeared Mon. night for Tues. publication, but still in time for Woodward to tak to Downie – jh)

Then on Monday, Woodward says to Downie, “uh, Len, I think we need to talk…”

Big coindicence? Sure doesn’t feel like one. Seems more like Bob suddenly realized Fitzgerald was on the hunt for the Veep, and if it came out that Mr. Big Swinging Journalist had known all along and was ratholing a huge story to protect the administration, he could just kiss his sweet Pulitzers goodbye. Sure Bob is willing to keep a secret for 30 years when it accrues to his benefit, but to risk this kind of professional humiliation and be scooped by some scrappy Irish prosecutor? Not bloody likely.

The Times article was the first to reveal that Cheney told Libby on June 12, 2003 that Joe Wilson’s wife worked at the CIA. It was during this time that Woodward was doing interviews for Plan of Attack (which I finally realized I was going to have to read, so I bought it on Amazon last night for 35 cents, and I figure that’s just about right). Woodward has said that the topic came up in “casual” conversation, and “he did not believe the information to be classified or sensitive.”

If Bob wants to claim that somebody mentioned this to him “casually,” that’s fine. I’m sure Bob believes this. All this says to me is that Bob got played like a two dollar banjo.

One does not mention something like this to the biggest investigative journalist in the world “casually,” especially in the midst of a concerted effort. The notion that this was all just “idle chatter” is absurd. There was a coordinated, tag-team effort in place to make sure that everyone who got a leak also got a confirming source. Matt Cooper heard it from Rove one day and Libby confirmed it the next. Rove’s email to Hadley indicates that Hadley may have been some sort of point man for the “plot against Wilson” (Judge Tatel’s words, not mine).

What other evidence points to Cheney? Well as I mentioned yesterday, the Washington Post has said that Woodward’s source has indeed testified in the investigation, but Adam Entous of Reuters says that “Mr. X” has not appeared before the grand jury.

If both facts are true, then anyone known to have appeared before the grand jury is “off” the suspect list.

The only two people who are known to have testified in the case, but not before the grand jury, are Richard B. Cheney and George W. Bush.

There are, of course, other possibilities. And right now the two other prime suspects are Stephen Hadley and Richard Armitage.

Up until the summer of 2004 people who testifying before they grand jury were often brought up in some secret back elevator to avoid press scrutiny, and I suppose that’s how they wheeled in Novak’s coffin undetected. But around that time Judge Hogan ruled that everyone who appeared before the gj had to walk in the front door (and wouldn’t I love to to know the series of events leading up to that). Anyway, from that point on it pretty much guaranteed that if someone was having an official Fitz gj interlude, the press knew about it.

Rove’s memo to Hadley about his conversation with Matt Cooper didn’t materialize until early in 2005. The NYT indicates that Hadley is “known to have been interviewed by investigators,” but nothing more. If he was questioned about the Rove email, it’s hard to imagine he appeared before the grand jury in the process — at this point it would be like trying to sneak in to Fort Knox and hoping nobody noticed.

Then there’s Richard Armitage, whom Michael Isikoff helpfully points the finger at in Newsweek this morning. Armitage is certainly reputed to be someone that Woodward spoke to extensively in the past, and he was part of the chain of events that led to putting the INR memo (which contained info on Valerie Wilson as part of a discussion of the Niger uranium claims) into Colin Powell’s hands.

But in June of 2003, Armitage and Powell were traveling when the document was prepared at the direction of Carl Ford, head of INR. Marc Grossman was Undersecretary of State and in charge of the department while Powell and Armitage were gone, and it was Grossman who finally told Libby that Wilson’s wife worked at the CIA on June 11 or 12 according to the indictment.

By one account in an LA Times article by Tom Hamburger and Sonni Efron, Armitage called Ford after the June 12 Walter Pincus story in the WaPo made reference to Niger Uranium and wanted to know what was up, so Ford forwarded him a copy of the INR memo.

But by other accounts, Armitage doesn’t enter the picture until after Wilson’s op-ed piece in the NYT on July 6, 2003. He thereafter called Ford and requested that Colin Powell be provided with information about Wilson, thus the INR memo was faxed to the White House for delivery to Powell on Air Force One. Due to the fact that Armitage is unfortunately out of the country and just about the only one of the major players not to have issued a denial, coupled with the fact that he is a Powell loyalist and not known to have been questioned by anyone up to this point, it has made him the right wing suspect of choice.

This isn’t like Watergate, in that Bob Woodward doesn’t have the loyalty and/or trust for Len Downie he felt toward Ben Bradlee, in whom he confided the identity of Deep Throat. It also isn’t like the Judy Miller affair, because the NYT decided that the release her source gave allowing her to testify also allowed them to print his name, which they did.

The Post has decided their loyalty is to keeping Bob Woodward’s personal secret, and Bob Woodward has decided his loyalty sure ain’t to the Post. Regardless, too many people are on the hunt for the identity of “Mr. X.,” and since Libby’s lawyers have loudly announced that this will play a big part in his defense we will probably all know his secret a whole lot sooner than 30 years.

Personally, I’ve got a side bet on Big Time in the pantry with the candlestick. But as the curtain rises inch by inch on the dirty little drama being played out in the BushCo. drawing room, one thing’s for certain — nobody is “wrapping up” anything anytime soon.

How Did the Cat Get Out of the Bag?