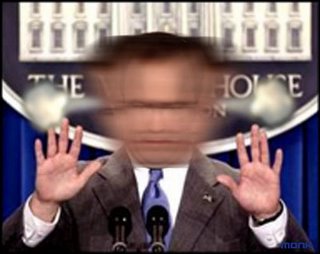 Bob Woodward certainly has caused a kerfluffle. While Preznit Never Responsible has fled to Asia in the wake of the wreckage caused by Hurricane Patrick, the White House came out from underneath the cone of silence on November 16 to announce that neither George Bush nor certain senior members of his staff were Woodward’s source.

Anyone want to count the number of times Scott McClellan has said “we will not comment on an ongoing investigation?”

Rumors have already circulated that McClellan will soon take the big stroll down pink slip alley, and I really don’t see how he can survive this. He’s already been a human pinata for the likes of David Gregory and Terry Moran for months now, and there has been no gaggle since November 6. The decision by the White House to break its own rule means that nobody this side of Les Kinsolving is going to provide Scottie with any shelter from the storm. Although the next gaggle should sure be some entertaining fodder for Crooks & Liars, McClellen was effectively neutered by the announcement.

So it begs the question — why did the White House suddenly decide, after all this time, to announce on the 16th that Dan Bartlett, Andy Card, Colin Powell, George Tenet, Karl Rove, John McLaughlin, Karen Hughes and Dubya himself were not the source for Woodward? And when many (including ourselves) noticed the conspicuous absence of Stephen Hadley from the list, why did they announce the following day that Hadley was not amongst the guilty? The new list also included Wolfowitz, Grossman, Feith, Edelman, Karl Ford, Alan Foley and David R. Shedd. (Oh, and we shouldn’t need to note but we will, none of these people speak without White House permission.)

Why should we believe them?

I’ll start with the assumption that Rove/Bush know who Woodward’s source is. Aside from the fact that these events didn’t happen in isolation, Woodward knows who he works for and it sure ain’t the Washington Post.

The second assumption is that the White House is still looking forward to Life After Traitorgate. We may think it’s not going away (and oh how our ranks have swelled since Libby’s indictment, no?) but Rove and Co. dream of isolating the problem from the White House and pushing it over “there,” wherever “there” may turn out to be. Allowing virtually everyone in the administration, including Dubya himself, to knowingly step up to tell a big, fat lie right now when this thing is getting ready to bust wide open makes little sense. It threatens to boomerang right back at them the minute Woodward’s source is revealed, and too many people now know who that is for that secret to be kept much past next month, let alone for the next 30 years.

So — the only reason I can think of to start announcing who isn’t the source is to douse the person who is the source with gasoline and hope someone sets him on fire.

Then began the weird parade of denials by “unidentified sources” who said that Cheney was not Woodward’s source. In the AP article by John Solomon, the source noted that “Woodward did not talk with the vice president that day.” As Laura Rozen pointed out, Woodward never said what “that day” was.

Then the WSJ had this weird bit, completely unsourced:

Vice President Dick Cheney isn’t believed to have talked to Special Prosecutor Patrick Fitzgerald since last year, nor has he given a waiver to Mr. Woodward. That removes him as Mr. Woodward’s source.

No attribution at all, provided as a pure statement of fact. I emailed one of the writers, John D McKinnon about it. He never got back.

I need me one of those magic 8 balls that peers into the black heart and scheduling log of Dick Cheney.

According to the same NYT article that says it’s not Card et. al, Big Time refuses to confirm or deny that he is Woodward’s source. And again the next day for the NYT article on the 17th. Perfectly in character for the crusty Cheney, who probably bristled at the audacity of any who dared to ask. It’s only weird in light of the fact that he then went and launched a bunch of anonymous people to go defend him with some really weird claims that anyone who’s even paying half attention is going to challenge.

It may well be that it’s not Cheney. But if the White House is indeed trying to lay the whole thing on him and then cut him loose, this is certainly a way they’d do it. And it’s a strategy they might pursue even if Cheney wasn’t the source, just to get it off their doorstep.

One other note — Hadley is reported to have shrugged off questions about whether he is “Mr. X” or not. I just don’t think this means much. Nor do I think it is Armitage, who — as David Corn notes — is the only person on the “Official Speculation List” who has not yet denied it. And I’ll take Condi off the list myself, Len Downie specifically said “he” and “him” with regard to Woodward’s source when he appeared on CNN the other day. That would just be intentionally misleading in a way I would expect from someone more like — oh, Bob Woodward.

Update: Condi and Bolton spokespeople have both said they were not Woodward’s source as well.