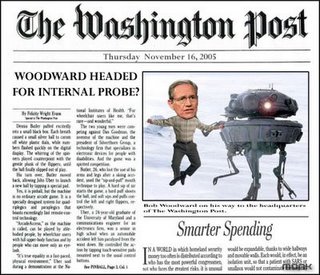 Many fine thinkers trying to sort their way through the maze created by Mr. Run-Amok tonight, all riffing off the erudite Kevin Drum who speculates as to why either Woodward and/or his source finally called Patrick Fitzgerald after his press conference on October 28, 2005. And their theories may well prove correct.

But I think Arianna is much closer to the mark on this one — the chain of events starts well before the Libby indictment was handed down. Trouble is, between Bob and Len Downie they are spinning about six different stories in time. The most recent of these is an interview given by Bob to Time Magazine as he takes yet another page out of the Judy Miller playbook and tells them stuff he withholds from his own paper.

Well nobody at the WaPo short of Richard Cohen would content themselves with such a horrible pack of inconsistencies anyway, so maybe it’s just as well. But it would be nice for all of us if Bobby could remember the stories he’s told in the past, ‘cos it’s damn hard to keep up with them. But let’s have a go.

As I’ve mentioned before, many denizens of Traitorgate world — including Steve Clemons, myself, the Washington bureau at the NYT, Michael Isikoff and apparently Len Downie himself — had spent the day before the Libby indictment trying to track down the rumor that Bob is working on a “blockbuster” story that some had heard involves Fred Fleitz.

Isikoff asks Bob about the rumor on Larry King. To which Bob replies:

WOODWARD: I wish I did have a bombshell. I don’t even have a firecracker. I’m sorry. In fact, I mean this tells you something about the atmosphere here. I got a call from somebody in the CIA saying he got a call from the best ‘New York Times’ reporter on this saying exactly that I supposedly had a bombshell. . . .Finally, Len Downie, who is the editor of the ‘Washington Post’ called me and said, ‘I hear you have a bombshell. Would you let me in on it.’…And I said I’m sorry to disappoint you but I don’t.”

Everybody goes home, Bob’s thrown a wet blanket on the whole thing, the rumor is not true. Only it is true. Bob is sitting on a blockbuster. And the lie about Len Downie is quite unnecessarily elaborate.

Includes the comment that “Downie said in an interview yesterday that Woodward told him about the contact to alert him to a possible story.”

It was just a few days before the indictment of former White House aide I. Lewis “Scooter” Libby was announced on Oct. 28 that Downie learned from Woodward that the Watergate legend had his own connection to the Valerie Plame case.

Okay, so it was “a few days before” the indictment that Downie first learned about Bob’s “connection.” So was that Larry King moment about Downie calling him and Bob saying there was no “blockbuster” just bullshit?

In the final weeks before the grand jury indicted vice presidential aide I. Lewis (“Scooter”) Libby on Oct. 28 for perjury and obstruction of justice, Woodward says he was asked by Downie to help report on the status of the probe. In the course of his reporting, Woodward says, “I learned something more” about the disclosure of Plame’s identity, which prompted him to admit to Downie for the first time that he had been told of Plameâ€™s CIA job by a senior administration official in mid June 2003.

So when exactly did Bob tell Downie about his “source?” I’m inclined to believe Downie’s assertion, that it came a couple of days prior to Oct. 28. Downie probably had asked him to do some reporting on Plame in the weeks prior, and why wouldn’t he. I’m surprised he didn’t ask a whole lot sooner.

The story about Downie calling him and asking him if he was sitting on a bombshell also sounds true. The Post has been held out on before. Ask their own staff:

“Woodward has periodically faced criticism for holding back scoops for his Simon & Schuster-published books.”

Now, I have no idea how the cat got let out of the bag, but it did. There seem to be two threads that, by Bob’s own admission, came to intersect in the days before the indictment such that he had to come clean to Downie:

1. A story Bob was working on
2. A source he could not reveal

To hear Bob tell it, the two are completely unrelated. Suddenly bingo, Bob is sitting there watching Fitzgerald’s press conference. As he tells Time Magazine, he was so struck with conscience he just had to come forward:

In his press conference announcing Libbyâ€™s indictment, Fitzgerald noted that, “Mr. Libby was the first official known to have told a reporter when he talked to Judith Miller in June of 2003 about Valerie Wilson.” Woodward realized, given that the indictment stated Libby disclosed the information to New York Times reporter Miller on June 23, that Libby was not the first official to talk about Wilson’s wife to a reporter. Woodward himself had received the information earlier.

According to Woodward, that triggered a call to his source. “I said it was clear to me that the source had told me [about Wilson’s wife] in mid-June,” says Woodward, “and this person could check his or her records and see that it was mid-June. My source said he or she had no alternative but to go to the prosecutor.

Does anyone have something to help digest this extra big super heaping helping of bullshit? ‘Cos it just will not stay down.

Woodward and/or his source suddenly feel compelled to come forward and tell the prosecutor something that is absolutely no help at all to Libby in his case. Libby is not charged with being the first to disclose the information to reporters, now is he? So we’re supposed to buy that the source — and Woodward is “not sure” whether they’ve spoken to Fitzgerald before or not (sure, Bob, sure) — is going to come forward, possibly admit they’re guilty of obstruction, false statement, and/or perjury, over a story which is of absolutely no benefit to Libby?

And then there’s the fact that he admits he’s willing to go to such lengths to help Libby but wouldn’t even tell his own paper what’s going on until he had to. Shit, he even told Ben Bradlee about Deep Throat. It’s clear where Bob’s loyalties lie. These are the actions of a political operative and not a reporter.

Something happened in the days before Libby’s indictment came down that set this all into motion, and how it all links together I am not sure. My money says Mr. Fitzgerald somehow set this ball rolling, and not Mr. Woodward or his ne’er-do-well source. The only thing I am sure of — Woodward’s cover story is a crock. And he seems to think he is justified in his dissembling now just as he was during the decades he protected the identity of Deep Throat.

Bob got lucky in Watergate — serving Bob Woodward also served the public interest for a moment in time. But since then the service of Bob’s massive ego has meant trotting along behind the crooks as bootlick to power, and I think he is about to find out that in this instance a curious public will cut him even less slack than his compatriots in the WaPo newsroom.