Where we see a coffin, Jean Schmidt sees an opportunity 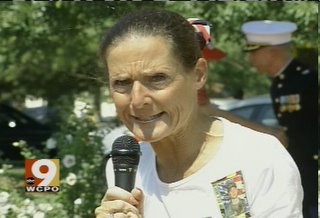 I am become death, the destroyer of worlds

Chris Hedges wrote that “War is a force that gives us meaning”. In Jean Schmidt’s case, war is what helps her fill her days, ghoul that she is. Twice she has broken from the confines of her district in Ohio and inserted herself into the national spotlight and it hasn’t been a pretty sight either time. Not surprisingly her story hasn’t changed much each time. She goes to a funeral and then she trashes a living decorated veteran.

Yikes. When asked about Democratic House candidate Paul Hackett’s obviously experience with the Iraq question, he served as a US soldier in Iraq, his Republican opponent, Jean Schmidt, responded that she just got back from a memorial for a local soldier who died.

Huh? Well with THAT kind of experience she should be an expert on the war pretty soon since the deaths keep going

Ms. Schmidt: Yesterday I stood at Arlington National Cemetery attending the funeral of a young marine in my district. He believed in what we were doing is the right thing and had the courage to lay his life on the line to do it. A few minutes ago I received a call from Colonel Danny Bop, Ohio Representative from the 88th district in the House of Representatives. He asked me to send Congress a message: Stay the course. He also asked me to send Congressman Murtha a message, that cowards cut and run, Marines never do. Danny and the rest of America and the world want the assurance from this body – that we will see this through.