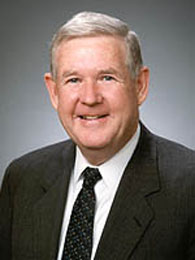 Here’s a link to the full text of Congressman Murtha’s statement today.

Crooks and Liars has the video. (Of course. Do they rock, or what?)

And via Atrios, even one of the yahoos at The Corner comprehends what a huge sea change this is to have Murtha — a defense hawk — stand up and say that the war is going badly and that we should leave Iraq and that serious debate on this needs to occur. Now.

MURTHA BREAKS [Rod Dreher]
Don’t know how many of you caught Rep. John Murtha’s very angry, very moving speech just now in which he called on the White House to institute an immediate withdrawal of US troops from Iraq. CNN didn’t air the entire thing, but as I listened to it, I could feel the ground shift. Murtha, as you know, is not a Pelosi-style Chardonnay Democrat; he’s a crusty retired career Marine who reminds me of the kinds of beer-slugging Democrats we used to have before the cultural left took over the party. Murtha, a conservative Dem who voted for the war, talked in detail about the sacrifices being borne by our soldiers and their families, and about his visits out to Walter Reed to look after the maimed, and how we’ve had enough, it’s time to come home. He was hell on the president too.

If tough, non-effete guys like Murtha are willing to go this far, and can make the case in ways that Red America can relate to — and listening to him talk was like listening to my dad, who’s about the same age, and his hunting buddies — then the president is in big trouble. I’m sure there’s going to be an anti-Murtha pile-on in the conservative blogosphere, but from where I sit, conservatives would be fools not to take this man seriously.

After Cheney’s petulant “Don’t you criticise me.” rant last night, Murtha’s in your face calling out of the VP today was a refreshing breath of air. And Dreher is right here: Republicans should take this statement from Murtha very seriously.

Look, my family has served in the military since before we were even a country. Every single generation in my family — sometimes multiple people in the generation, depending on the conflict — has served honorably. Murtha is originally from West Virginia, my home state, and his speech today hit at the heart of things in the heartland, where plain-speaking and experience carry a helluva lot of weight.

This speech today ought to bring a chill to every desk jockey, non-serving war supporter out there — and especially within the Administration, where so many of the biggest hawks not only never served in the military, but have a habit of peevishly dismissing the advice from the people who have.

Murtha has credibility, something that none of the fighting keyboardists can hope to have, because Murtha has put his ass on the line — and he has spent a lot of time visiting with the guys who are pouring back through Walter Reed. And talking with military commanders, both at the Pentagon and in the field. (You know, the non-kiss-ass guys. Ahem.)

When you couple Murtha’s statement with the excellent article that James Fallows has in the December issue of Atlantic Monthly, you see a widening pattern of blinders and dismissal of criticism on the part of the civilian decision-making and public relations campaigns in this Administration. And it is a campaign that doesn’t just get paid out in votes or influence — but it is paid in lives, in limbs, and in the horror that is war, and that is having a devestating toll on our armed forces.

Look, I have friends and family who are currently serving, some of whom are officers, and have served in other conflicts and under other leadership over the course of years. I have never, in all of my years of knowing some of these folks, seen them this distressed about the state of the service. They are worried about the soldiers they command, the soldiers with whom they serve, and the lack of any real opportunity to get any sort of hearing of grievances when there are issues that need addressing.

To make matters worse, I also know a number of retired military personnel, some of whom were in influential positions at the Pentagon or elsewhere at one point or another — and every single one of them is disgusted by how things are going. There is fear that the way things are being handled will break both the Army and the Marines, because recruiting policies have changed so drastically and both branches are so woefully undermanned in critical areas for the conflict in Iraq, notably interpreters.

We have hard choices to make. And this Administration has got to start listening to criticism from outside the President’s inner circle — before it is too late for more of our soldiers and for the rest of America.

UPDATE: Forgot to include the fact that Fallows was on Fresh Air last night, being interviewed about his Atlantic article. It was a great interview, and well worth a listen.