So, One Source is Card? Who Is Next? 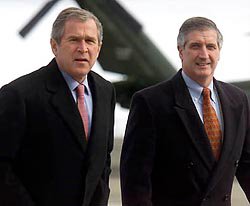 The WaPo is reporting that Andy Card, the WH Chief of Staff and Preznit right-hand man, was one source for information for Bob “Mr. Run Amok” Woodward. Woody is saying they didn’t discuss Plame at all.

The Post disclosed this morning that Woodward testified under oath Monday in the CIA leak case. Woodward said today he had gotten permission from one of his sources, White House chief of staff Andrew H. Card Jr., to disclose that he had testified that their June 20, 2003 conversation did not involve Plame, the wife of administration critic Joseph C. Wilson IV. He said he had “pushed” his other administration source, without success, to allow him to discuss that person’s identity, but that the source has insisted that the waiver applies only to Woodward’s testimony.

Awfully nice of Card to allow Woodward to clear his name off the list of potential Deep Throat II nominees (hat tip to reader Jim S for that name — good one!)…but who does that leave as a “senior administration official?” (Assuming of course that Woodward’s attribution is an accurate one, and not another “former White House staffer” attempt at Administration obfuscation.)

Carol Leonnig, federal court reporter of the WaPo, is on MSNBC right now discussing the Woodward revelation today. She doesn’t seem happy. At all.

And she is saying that the Woodward story doesn’t change the facts alleged by Fitz in Libby’s indictment regarding Libby’s alleged false statements. She is saying that it gives Libby’s defense counsel a tool for raising the issue of reasonable doubt on sourcing — but that doesn’t change the ultimate question of whether or not Libby gave false statements, false testimony or obstructed the investigation.

Lots of developing information on this story, clearly. We’ll get it to you as we know it.

One thing for sure: Fitz is looking at others in the Administration beyond Rove and Libby. And at least one of those other officials is talking. Enough to shake Bob Woodward loose. Wonder what else this person is saying? And about whom? Stay tuned.

So, One Source is Card? Who Is Next?