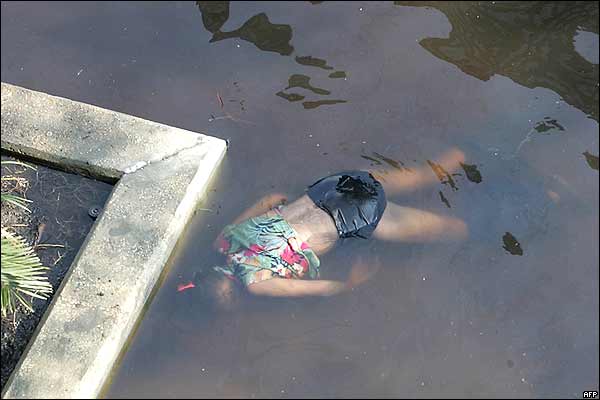 And to think, the Administration’s biggest worry was the photography of the bodies of victims. I think leaving them to rot is a slightly bigger problem, don’t you think?

The continuing Shame of America. No respect for the poor and disenfranchised, even when you’re dead.

On Anderson Cooper 360 last night, a report that just makes you sick. I don’t know who the Bush Admin was going to get to believe that they had found all the bodies after this disaster. When they called off the search on October 3, there was such an outcry that it has continued, but folks are coming home and finding the corpses of loved ones rotting in homes. (CNN):

The official search-and-rescue effort was called off October 3, but there was such a backlash, crews resumed searching demolished neighborhoods. They have cleared areas zip code by zip code.

There was no joy for Paul Murphy (ph) in this homecoming. When he walked into his house in New Orleans’ Ninth Ward last month for the first time since Katrina, it was shock and anger.

UNIDENTIFIED MALE: So, I’m thinking that, OK, I was going to come and salvage a few pictures or something. And I walk in here. I found my grandma on the floor dead.

DORNIN: Since November 1, 10 bodies have been found in the ruins of the Ninth Ward. The last area, known as the Lower Ninth, will open to residents December 1. Coroner Frank Minyard worries about what people will find.

(on camera): You’re fully expecting that more bodies will come in once they open the Ninth Ward?

FRANK MINYARD, ORLEANS PARISH CORONER: Yes. And I think it’s — it’s going to come in for a good while. There’s so much rubbish around that they might find people in the rubbish. DORNIN (voice-over): They already have. And there are still many bodies left unidentified and unclaimed.

MINYARD: We have 150 autopsies left to do, all on unidentified people. Hopefully, that — that will help us identify that person, if we can find a pacemaker or an artificial hip or something. Then we’re into DNA.

DORNIN: Susan Eaton (ph) asked if she could send a DNA sample and was told DNA samples were not being accepted. Nearly 80 days after Katrina, not one DNA test has been done.

To add another layer of disbelief, after the state called off the search, the firm doing the body count – Kenyon International – was still racking in payments up until yesterday.:

But on Sept. 12, Louisiana signed a body-recovery contract that included $25,000 for body bags. The state called off its search for victims Tuesday, but it’s bound through Nov. 15 by a contract with a Texas firm that’s costing it as much as $118,000 a day.

Kenyon, you may recall, had ties to Bush going back to his days as governor of Texas, and was accused of illegally discarding and desecrating corpses, yet they received the contract. More shame.