No Wonder He’s On the Road 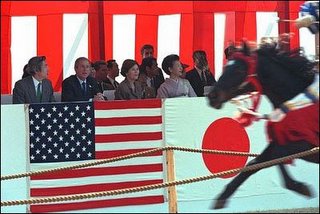 Nothing like a little horseback archery demonstration in Japan to take your mind off things. Or maybe not:

The Senate signaled its growing unease with the war in Iraq today, voting overwhelmingly to demand regular reports from the White House on the course of the conflict and on the progress that Iraqi forces are making in securing their own country.

The vote, 79 to 19, came on an amendment to a spending bill that ultimately passed without opposition. The bipartisan support for the amendment sponsored by Senator John W. Warner, the Virginia Republican who heads the Armed Services Committee, reflected anxiety among Republicans as well as Democrats.

So, let me get this straight: the Republican controlled Senate wants regular reports on how things are going in Iraq so that they can do some oversight? Hmmmm….well, that’s different. Who knew they wanted to actually do their jobs?

Oh, wait. It’s going into the next election cycle.

Mwahaha…and Charlie Black just said on CNN that this is no big deal because “the President is still in charge.” Um…yeah. And things have gone so great with that thus far, eh? It’s just been all flowers and candy over in Iraq, hasn’t it…oh, no…erm…not so much.

Additionally, the Republican plan (led by Sen. Lindsey Graham) to completely gut habeas protections for “enemy combatants” held in US custody has been modified somewhat, maintaining some level of constitutional protections under the modified amendment passed today. (I’m still reviewing the text on this, so I’m going to reserve any substantial comment on it until I’ve given it a complete read.)

Included in the WaPo report on the habeas changes was this tidbit:

But there are signs of White House divisions over the detainee issue. President Bush’s national security adviser, Stephen J. Hadley, acknowledged Sunday on CNN that he has begun negotiating with McCain on detainee issues. That contrasts with a White House veto threat Sept. 30 that left virtually no room for compromise.

Looks like Bushie went out of town so Hadley could blink for him. So much for that iron-clad veto threat. And the White House which bragged so much about being leakproof has become a sieve.

Maybe they are just floating out the inevitable. The Preznit’s poll ratings are at 37% in the Republican friendly Gallup poll. That doesn’t give him or his staff a whole lot of clout and leverage.

I’m thinking the arrow and pony show is looking better and better to Bushie. Especially with a Senate full of Brutuses waiting to stab him in the back to save their own political hides.

No Wonder He’s On the Road