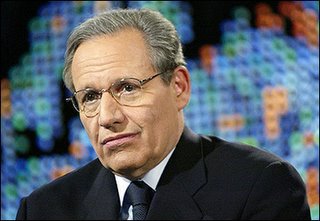 Bobby just can’t stand to be out of the limelight.

For tomorrow’s WaPo, Woodward is writing that he testified under oath before Patrick Fitzgerald’s grand jury Monday, and says “a senior administration official” told him about Valerie Plame and her position at the CIA more than a month before Robert Novak’s column appeared (which would’ve been July 11, 2003):

In a more than two-hour deposition, Woodward told Special Counsel Patrick J. Fitzgerald that the official casually told him in mid-June 2003 that Plame worked as a CIA analyst on weapons of mass destruction, and that he did not believe the information to be classified or sensitive, according to a statement Woodward released yesterday.

Fitzgerald interviewed Woodward about the previously undisclosed conversation after the official alerted the prosecutor to it on Nov. 3 — one week after Vice President Cheney’s chief of staff, I. Lewis “Scooter” Libby, was indicted in the investigation.

Woodward says he did not hear it from Libby, and also claims that he was the first journalist anyone in the Bush administration leaked Plame’s identity to.

Rover is also denying it is him:

Mark Corallo, a spokesman for Rove, said that Rove is not the unnamed official who told Woodward about Plame and that he did not discuss Plame with Woodward.

Libby’s lawyer also goes on the attack with a bit of strategic nonsense:

“If what Woodward says is so, will Mr. Fitzgerald now say he was wrong to say on TV that Scooter Libby was the first official to give this information to a reporter?” Jeffress said last night. “The second question I would have is: Why did Mr. Fitzgerald indict Mr. Libby before fully investigating what other reporters knew about Wilson’s wife?”

I’m sure if it turns out to be true Fitzgerald will happily acknowledge the change in chronology. And if Bobby didn’t pipe up about this earlier, how was Fitzgerald supposed to know about it? I’m certain if Mr. Jeffres” client had been honest about everyone he and all his cronies had spoken with Mr. Fitzgerald would’ve given them all ample opportunity to testify before the grand jury.

Woodward says he told Walter Pincus that “Wilson’s wife worked at the CIA as a WMD analyst,” although Pincus says he doesn’t remember Woodward telling him that, and can’t imagine how he would have forgotten. Is Bobby just making a desperate bid to relive his Watergate glory and thrust himself into the center of things? You have to wonder.

And it seems that Woodward is his paper’s own little Miss Run-Amok:

Woodward never mentioned this contact — which was at the center of a criminal investigation and a high-stakes First Amendment legal battle between the prosecutor and two news organizations — to his supervisors until last month. Downie said in an interview yesterday that Woodward told him about the contact to alert him to a possible story. He declined to say whether he was upset that Woodward withheld the information from him.

I wonder if he had to answer questions from Fitzgerald about how he supposedly saw a CIA report that said there was no damage done as a result of Valerie Plame’s outing.

I doubt it. Fitzgerald, like the rest of us, probably knew it was bullshit.

(more coming as I pull out the timelines etc.)