Bobby Has a Secret 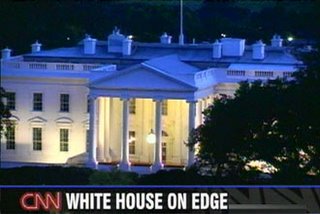 Atrios put up a post about Woodward’s appearance on Larry King the night before Fitzgerald announced the Libby indictments, where Michael Isikoff asks him about a “bombshell” revelation that he was supposedly sitting on. Woodward poo-poohs the whole thing. But it jogged my memory, because that night I remember hearing that same rumor and I took it seriously enough to call both Arianna and the NYT about it, and I could not remember for the life of me where I heard it.

From the Washington Note:

[A] short while ago — one of America’s top journalists called me to ask what I knew about Fleitz. He said rumors were swirling everywhere and that a “really wild rumor” was that Bob Woodward had a piece appearing in tomorrow’s Washington Post focusing on Fleitz. Realize — NOTHING substantiated here.

Part of the rumor is that Fleitz is on leave.

I just tried to track that down. I just called Fred Fleitz, but got his answering machine and nothing seemed out of the ordinary. I then called Under Secretary of State Bob Joseph’s office and talked to a person who told me that Fleitz was on leave for two days but would return to the office Monday morning.

I know nothing more. But here is what I wrote on Fleitz and the possibility of a Plame connection a while back. . .plus if you use the search function on the site for “Fleitz”, you will find a lot of commentary on this website about him. He’s an interesting, swashbuckling, rough-and-tough character who kept his CIA WINPAC portfolio despite being seconded to the State Department.

Arianna has said in the past that Fleitz was one of Judy Miller’s sources. He was Bolton’s go-to guy. To the best of my knowledge he has never been questioned by Fitzgerald, which would make sense, because otherwise Fitzgerald would’ve tripped to Woodward earlier.

It looks like Mr. Fitzgerald may finally be on the Bolton trail after all.

Update: BTW, while we’re wildly speculating here, I’ll mention that I was talking to one of the journalists who was leaked to at one point, and I asked them if they thought anyone other than Rove and Libby might be indicted. And they said “who was that guy who worked for John Bolton?” and I said “Fred Fleitz?” and they said “yeah, him.” But they did it in a bit of a jokey fashion so I didn’t take it entirely seriously (it was someone who knew, undoubtedly, who Fred Fleitz was). I just offer that up as more fodder.

Update 2: Jeralyn also thinks it might be Hannah, Fleitz or Wurmser, and has a side bet on Wurmser.

Update 3: A lot of speculation that Woodward’s “source” is someone who has appeared before the grand jury. While it’s possible I would say it was unlikely, because unless the person lied Fitz would’ve known about Booby and hauled him in long ago. As much as I’d love to believe Rove gave Fitz “pause” by ratting Cheney out, I think realistically it’s much more likely that whoever this person is, they have never been questioned by Fitzgerald before. And I believe that short list includes both Bolton and Fleitz.

Update 4: emptywheel: “Well, maybe the reason Fitzgerald didn’t hit Libby with the full force of the Espionage Charges that are obviously just beneath the surface of Libby’s perjury indictment is because he wanted to smoke out all the journalists that Libby would produce as evidence that, either he’s an idiot, or he’s an idiot. Libby’s probably searching his contact files for discussions about Wilson he had before the tell-tale conversation with Ari Fleischer. So perhaps former kingkiller Bob Woodward won’t be the only one who we hear of learning of Wilson’s wife in June?”

Bobby Has a Secret