Did Rover Roll Over? 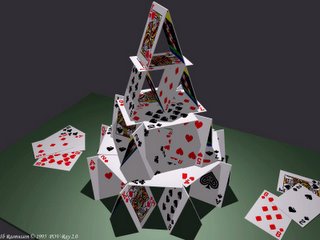 Jeralyn makes a persuasive argument today that Rover’s last-minute reprieve from the hangman’s noose in Traitorgate came as a result of a deal with Fitzgerald in exchange for cooperation against Libby or Cheney:

I think there are two issues of timing with respect to Karl Rove. One pertains to whether he made a deal with Fitzgerald in exchange for cooperating against Libby and/or Cheney, and the other pertains to what he gets from Fitzgerald for that cooperation. I think we will learn the first within weeks and we won’t learn the second for a long time.

This leads back to the question of what Rove told Fitzgerald about Libby or others in the 11th hour before Libby’s indictment. I think Rove may have turned over additional documents, such as an e-mail (besides the one with Adam Levine) establishing who first told Libby that Joseph Wilson’s wife worked for the CIA and was involved in sending Wilson to Niger â€” and that it was either someone at the CIA or a member of the White House Iraq Group. Perhaps Rove was copied on an e-mail between them and only recently located it. This would be confirming evidence that Libby lied when he told investigators and the grand jury that he initially learned about Wilson’s employment with the CIA from reporters.

Maybe it was these e-mails that Fitzgerald picked up when he visited Rove’s lawyer’s office the day before the indictments were issued.

She may well be right, it would certainly be an explanation as to why Fitzgerald backed off at the last minute.

However, I think that if Rove gave anybody up, it had to be Cheney. I read over the Libby indictment again last night, and Fitzgerald has him cold (more about that later this afternoon). I don’t think he would let Rove skate for another nail in Scooter’s already air-tight coffin.

And Jeralyn does draw a couple of enticing scenarios for an upcoming Libby trial:

It’s doubtful Fitzgerald would move against the vice president of the United States based solely on information from Karl Rove. But if, down the line, Fitzgerald could turn Libby, he might have two corroborating sources and decide to take a stab at Cheney.

Many (including me) have theorized that Libby would never give up Cheney because of their closeness. But Libby will receive a copy of Cheney’s statement to Fitzgerald in discovery. If Rove has provided proof that Cheney lied, Libby might just decide itâ€™s hopeless and join Fitzgerald’s team.

The second possibility is that Libby goes to trial, gets convicted, loses his appeals, and then, with no more 5th Amendment protection, is hauled in front of a grand jury by Fitzgerald who extracts information about Cheney. Waas mentions this possibility in his article.

If true, this is one dangerous game they are playing. While I’m sure Dubya would sacrifice Cheney to save Rove, it really is hard to contemplate that this arrogant administration is already making that kind of concession to Fitzgerald. It’s the kind of move that threatens to bring down the whole house of cards, especially when you’re talking about someone as vicious and vindictive as Dick Cheney.

Whatever is going on behind the White House wall of silence, I’m quite certain it is not the portrait of amicable let’s-get-back-to-screwing-the-poor relief that the Rove machine is zealously painting.

Did Rover Roll Over?