A Makeunder Was the Least of Her Worries 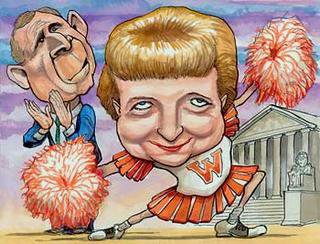 While it is awfully kind of Elizabeth Bumiller to blow some smoke Harriet Miers way in the NYTimes, it would be more helpful if she were actually honest about what caused problems for Miers in the first place.

Pity articles do no one any good — especially in an Administration where enabling the Boy King has been raised to an art form.

As the handful of people in Ms. Miers’s West Wing office that Sunday night tell it, the president’s beleaguered counsel brought a sardonic sense of humor to the proceedings. When Ed Gillespie, an adviser at the meeting, told Judge Alito that if he was going to wear his glasses for the announcement then he should also wear them to his confirmation hearings, Ms. Miers offered some advice of her own.

“But don’t wear eyeliner,” she told Judge Alito, according to participants, who say the meeting immediately broke into laughter.

As everyone knew, Ms. Miers was referring to criticism from bloggers and fashion writers about her heavy eye makeup. To Ms. Miers’s supporters, the attacks on her appearance were a last straw in the weeks of condemnation about her credentials, intellect and chirpy notes to Mr. Bush and his wife as “the greatest!”

Sure was nice of Ed Gillespie to pass along that anecdote to Bumiller, but why report it as news? I mean, the spin is obvious: pity Miers, yet admire her spunky back-on-the-job tenacity in the face of such meanie leberals who were petty about her eyeliner. Whew, what a role model for women everywhere, what with the suck-up affirmative action program Miers has enjoyed as a member of the Preznit’s crony entourage.

What, exactly, does that have to do with the truth of the matter, that Miers nomination was scuttled by a broad-ranging coalition of horrified conservatives, who wanted competence and excellence on the highest court, and not some lackey chosen for the sole purpose of having a court crony in Bushie’s pocket?

Liberals didn’t have to lift a finger — this was a self-inflicted Rethug wound, straight from Bushie to the heart of his own party. To say otherwise is to…erm…lie.

And why, exactly, is it considered journalism to allow the Republicans to re-write history, giving their own version of facts without calling them on it? Without pointing out that they are lying through their teeth? Why is Bumiller, and by extension the NYTimes, acting like just as much a cheerleader as Miers is for Bushie’s team?

NOTE: Just a note on what Jane posted last night about involvement. Tomorrow evening is the kick-off for the Democratic National Committee 50 State Strategy. Check the website here for more information, and to find a meeting near you — or to sign up as a host if you can’t find a local meeting. (Hat tip to reader hoosierville for the link.) [Ooops: I initially had this listed as this evening. Big thanks to SusanS for correcting me. The meetings are tomorrow night.]

UPDATE: Thanks to reader Terry for the link to this amusing bit of snark.

A Makeunder Was the Least of Her Worries