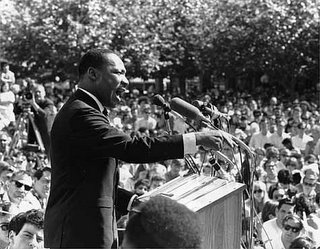 How did we go from here:

— Speech by Martin Luther King, Jr., delivered on the steps at the Lincoln Memorial in Washington D.C. on August 28, 1963.

To this, in the WaPo, from the current Administration’s policies in the Department of Justice’s Civil Rights Division:

At the same time, prosecutions for the kinds of racial and gender discrimination crimes traditionally handled by the division have declined 40 percent over the past five years, according to department statistics. Dozens of lawyers find themselves handling appeals of deportation orders and other immigration matters instead of civil rights cases.

The division has also come under criticism from the courts and some Democrats for its decision in August to approve a Georgia program requiring voters to present government-issued identification cards at the polls. The program was halted by an appellate court panel and a district court judge, who likened it to a poll tax from the Jim Crow era.

According to the WaPo, the Civil Rights Division lost nearly 20 percent of its attorneys just in the last year, and the morale in the remaining members of the department is horrid.

I am heartsick. And very angry. Some days the long-term consequences of this Administration are painful to the soul.