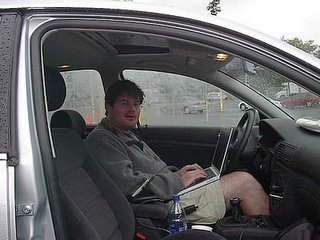 In what I can only regard as the seventh sign of the apocalypse, the end of civilization as we know it or the worst PMS I have ever had, the LA Times has replaced Robert Scheer with Jonah Goldberg.

TBogg: “I’m sure they have their reasons: some sort of Doughy Pantload Affirmative Action Program but, in a time when newspapers are cutting back on personnel, does it make any sense to hire someone who need a private editor 24/7?”

SteveAudio: “And now the page has changed its name from “Opinion” (simple, clear) to “Currents” (pretentious, silly). Instead of ‘Current’ call it ‘Undertow’ as good writing and common sense are swept out to sea to drown. In their piece on the troubles of the United Nations last week, the front page offered reasoned opinions by David Bossie, Ron Silver, and some tool from the American Enterprise Institute. Imagine! That’s like asking David Duke, Strom Thurmand, and Clarence Thomas to offer opinion on the NAACP. Such balance, such fairness.”

Roy: “As fans of his lumpy prose can attest, Goldberg himself clucks quite loudly and frequently during intellectual endeavors, never more so than when he is clearly full of shit, and seems to think this clucking holds said shit together.'”

At least we can read Robert Scheer at the HuffPo. And the LA Times will remain a highly absorbent cat box liner.