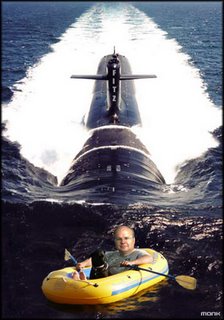 To read the new NYT piece by Ann Kornblut about Karl Rove, you’d think his life was all beer and Skittles at this point. Vindicated, spunky, back to running the federal budget like a corporate chop shop:

He is running meetings and pursuing candidates for the 2006 elections – and, associates say, devising long-term political plans that suggest he does not believe he will face future legal trouble despite the C.I.A. leak investigation in which he has been involved.

No mention that Gee Dubya has stepped anywhere near the toxic “boy genius,” but okay. Are we to believe this unquestioning story, where gushing reports of blue skies for Rover are all there is to be had? Not according to Murray Waas, who says Fitzgerald still has the “boy genius” in his sights, and wants to know what evidence there is to be had from Libby:

Fitzgerald did not seek an indictment of Rove, opting to present any potential new evidence on the White House deputy chief of staff to a new grand jury. In recent days, Fitzgerald has reinterviewed several witnesses with knowledge of Rove’s role in the Plame leak and talked with attorneys of other potential witnesses.

The ongoing investigation means that Rove’s legal status is likely to remain up in the air until the final disposition of Libby’s case. That could be two years from now, or even longer. Rove’s predicament contradicts recent news accounts indicating that Fitzgerald will conclude his probe of Rove in the near future.

This jibes with what I heard from a slightly less credulous New York Times source yesterday, who said that Fitzgerald’s inquiry into Rove was likely to play out over a longer period of time than had heretofore been assumed. Sounds like Fitzgerald not only wants to turn Libby against Big Time, he’s also hoping to break up any sort of mutual defense between Rove and Libby, and deal with Libby to bring down Rove:

Rove testified to the grand jury that in discussing Plame with Novak and Cooper, he was simply repeating what he had heard from a journalist or from Libby. Rove said he believed that Libby, too, had only learned about Plame from journalists.

Sources close to Rove say that Libby very likely misled Rove when he told Rove that he had learned about Plame from journalists. Investigators also want to learn from Libby whether that’s true, or whether Libby told Rove a different source for the Plame information — specifically other government officials with access to highly classified information.

Is Libby willing to tack on a few more years of canned corn and trading smokes with the screws to back Karl up? Well that is a very good question.