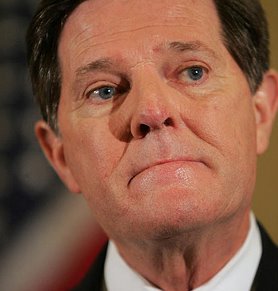 Oh, man. This is too good to be true. Have to stop giggling long enough to type. *wipes eyes*

*snerk* Tom Delay opened his own big mouth and got himself indicted.

The last-minute negotiations between the lawyers and Texas prosecutor Ronnie Earle were arranged after DeLay made what Earle considered a seriously damaging admission about his fundraising activities during an Aug. 17 meeting with the prosecutor in Austin.

At that session, DeLay acknowledged that in 2002 he was informed about and expressed his support for transfers of $190,000 in mostly corporate funds from his Texas political action committee to an arm of the Republican National Committee in Washington and then back to Texas, according to the sources, who spoke on the condition that they not be named.

This, my friends, is what we like to call “trying to get out in front of a damning story.” But the real question is whether this is Delay trying to get in front of it — or Republican leadership trying to shove him out the door before he drags everyone even further down in the 2006 elections.

The WaPo article is somewhat sourced from legal folks involved in the case, presumably some close to Delay trying to cast doubt on Earle’s case. DeGuerin, Delay’s very able trial attorney, has tried in recent weeks to cast some serious doubt publicly on any admissions against interest that Delay might have made to Ronnie Earle in that private meeting prior to the first indictment. But what about this:

“I knew about this after it happened, because Jim Ellis in passing said, ‘Oh, by the way, we sent some money to . . . [an arm of the Republican National Committee]’ and I said okay,” DeLay said on the “Fox News Sunday” talk show Oct. 2. “That wasn’t an approval. That was an acknowledgment” of what had happened. The meeting occurred, he said, in October 2002.

How hilarious is that? To be hoisted on your own petard based on interviews you gave to Fox News? Mwahahaha. (You remember, the interview that Fox News paid Delay close to $14,000 to come and do for them?)

Sure does make it difficult to spin away that admission when your client keeps on making it. On TV. To a friendly interviewer. Ahem.

Bragging is never a good idea when you are trying to avoid criminal prosecution. I’m just saying.

“The time has come that the American people know exactly what their Representatives are doing here in Washington. Are they feeding at the public trough, taking lobbyist-paid vacations, getting wined and dined by special interest groups? Or are they working hard to represent their constituents? The people, the American people, have a right to know…I say the best disinfectant is full disclosure, not isolation” -Tom Delay 1995