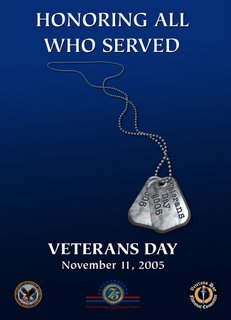 We’d like to honor our veterans today — not with some disrespectful half-assed warmed-over speech, but by bringing you some of the finer veteran voices in the blogosphere, who have a word or two for the Commander in Cheap:

Bob Geiger: “Mr. President, it’s not the toy-soldier, “bring-it-on” thrill that your protected, sheltered experience would lead you to believe. It is terrifying. You’re scared to death, shoot at almost anything that moves and pray to whatever deity you worship that you see tomorrow. But you would have no way of knowing that -â€“ not even through the stories of the sycophants you are surrounded by, most of whom have never served a day in uniform in their lives.

Jo Fish: “Hmmm….cooked intel, Downing Street Memo, Joe Wilson, Yellowcake, Powell’s former Chief of Staff, and an indictment of an intel-cooker for what in any other war would be treasonous allegations for leaking to discredit someone calling bullshit on the intel-cooking. Rewrite history? Not required…it’s all documented out here on the internets…for better or for worse, the atrocities have been documented. Nice try though on that deeply irresponsible revision of history, too bad it’s not going to work unless everyone turns into Monica Crowley by midnight tonight.”

And Gord, on the 230th birthday of the US Marine Corps, which was yesterday: “On this night, somewhere in Western Iraq near the Syrian border, in a fighting hole with a tarp pulled over them so the light from the match used as a birthday candle won’t show, two Marines, tired, dirty, smelly, maybe scared, cut a piece of MRE pound cake with a K-Bar fighting knife. The first piece goes to a 21 year old Corporal, the second to an 18 year old PFC. Even out on the sharp end, Marines will do this small thing in honor of those who have gone before, and each other.

“This old Marine’s thoughts are of those young Marines, stuck in the middle of nowhere on a mission they won’t know much about until the books are written years from now. They probably don’t give much of a shit about whether it’s right or wrong. They go where they’re told and do what they’ve been trained to do. They do their duty as they see it to do. They’re Marines.

(graphic via Fixer at Alternate Brain)