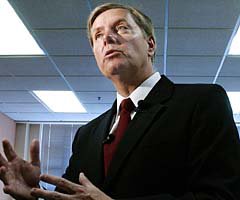 The Senate passed it’s end run around the Supreme Court and the Constitution bill. Thanks, Lindsey Graham. Wanker.

The Senate voted Thursday to strip captured “enemy combatants” at GuantÃ¡namo Bay, Cuba, of the principal legal tool given to them last year by the Supreme Court when it allowed them to challenge their detentions in United States courts.

The vote, 49 to 42, on an amendment to a military budget bill by Senator Lindsey Graham, Republican of South Carolina, comes at a time of intense debate over the government’s treatment of prisoners in American custody worldwide, and just days after the Senate passed a measure by Senator John McCain banning abusive treatment of them.

If approved in its current form by both the Senate and the House, which has not yet considered the measure but where passage is considered likely, the law would nullify a June 2004 Supreme Court opinion that detainees at GuantÃ¡namo Bay had a right to challenge their detentions in court.

So, let me get this straight: the Senate wants to block out the only branch of government doing any oversight on the treatment of detainees, and in doing so completely stomp on the principle of habeas corpus and the Constitution.

Think that doesn’t have long-term implications for the rest of us? Think again — TalkLeft has much more here and here.

The House still hasn’t taken up the measure, so there is still hope that this won’t make it past this initial stage. But the Senate is supposed to be the grown-up, deliberative body, as envisioned by the Framers. Shameful.

In a nation of laws, the protections afforded in the Constitution along with the penalties enacted into law apply to everyone, equally. When we start tinkering with how the laws apply and limiting legal protections for a few, it taints the entire process — and makes us look more and more like a nation that only uses law for a justification for tyranny.

How far do we go? And how far does that start to reach into our entire society, before we all wake up and realize how much erosion is occurring to our fundamental principles of fairness?

This is America. We are far better than this. And every Senator who voted for this ought to hang their heads today.