Did Judy Grab All the Kool-Aid On Her Way Out the Door? 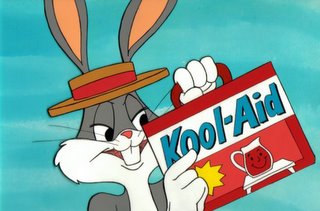 The NYT editorial page seems to be running low:

Mr. Graham is a careful and principled senator who argues eloquently for his measure. The Senate should adopt his proposal for a federal court review of detentions, preferably by a huge margin, and the House should follow suit. We’d love to see Congress then defy the inevitable veto threats from the White House, driven by Vice President Dick Cheney, who is still skulking around Capitol Hill trying to legalize torture at the C.I.A.’s secret prison camps around the world. But we cannot support Mr. Graham in trying to rewrite the habeas corpus law.

Fewer than 200 of the approximately 500 prisoners at GuantÃ¡namo Bay have filed petitions for habeas corpus hearings. They are not seeking trials, merely asking why they are being held. And according to government and military officials, an overwhelming majority should not have been taken prisoner in the first place. These men have been in isolation for nearly four years, subject to months of interrogation. Do they really have anything left to say?

The habeas petitions are not an undue burden. And in any case, they are a responsibility that this nation has always assumed to ensure that no one is held prisoner unjustly.

Did Judy Grab All the Kool-Aid On Her Way Out the Door?