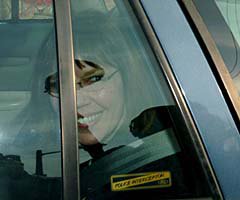 Just got off the phone with a source at the NYT, who says:

1. As of yesterday, the story that Susan Ralston is going before Fitzgerald’s grand jury again did not check out. (Note: A second source now says the Ralston story is bs.)

2. They believe Fitzgerald may be pursuing “a new line of inquiry” regarding Rove. Whatever Rove produced at the last minute “may have fallen under the heading of ‘more difficult to prove intent to mislead.'” But whatever happens, the Hadley memo is going to play a “serious part of any indictment,” and Fitzgerald’s investigation may be “longer rather than shorter.”

3. They were sorry to see Judy go. “Many people were hoping for an actual execution in the town square but it was not to happen,” they said. “It’s hard to imagine how dreadful it is to work with her,” and “a twenty year nightmare is over.”

4. Despite her contention that she has “many job offers” (and no, Judy, wingnut welfare from Regnery is not employment), they see her “sinking into the shadows of some right wing think tank.”

5. For those who just can’t get enough of Judy’s “tropism“, she will be on Larry King tonight, opposite Pinch on Charlie Rose.

And I was not the one who dubbed it “dueling ex-lovers.”

Update: Rover will be on CNN tonight at 7pm ET/4pm PT. Quite the TV evening for Plameiacs I would say.