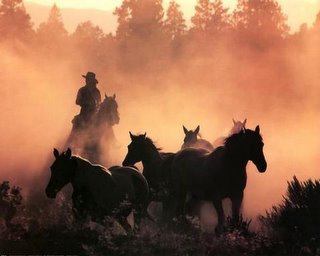 According to Doug Jehl at the NYTimes, the CIA’s Inspector General warned in a report that interrogation techniques approved after 9/11 might violate provisions of the Geneva Conventions.

The current and former intelligence officials who described Mr. Helgerson’s report include supporters and critics of his findings. None would agree to be identified by name, and none would describe his conclusions in specific detail. They said the report had included 10 recommendations for changes in the agency’s handling of terror suspects, but they would not say what those recommendations were.

Porter J. Goss, the C.I.A. director, testified this year that eight of the report’s recommendations had been accepted, but did not describe them. The inspector general is an independent official whose auditing role at the agency was established by Congress, but whose reports to the agency’s director are not binding.

Interesting. So, 8 of 10 recommendations have been implemented. Wonder what hasn’t been done? And why? Wouldn’t it be nice to be able to have faith that oversight is being done on this report?

And for more on the CIA, former general counsel Jeffrey Smith has a blistering editorial in the WaPo.

The Post reported on Oct. 27 that John Negroponte, director of national intelligence, has directed intelligence agencies to “bolster the growth of democracy” and support the rule of law in other nations. Those are noble causes that will be embraced by all intelligence officers. But if the vice president’s proposal is adopted, the CIA will presumably be free to bolster democracy by torturing anyone who does not embrace it with sufficient enthusiasm. Some democracy.

Not exactly a fan of the VP, I’d say. It’s an exceptional argument for the international legal principles to which we have adhered, and an explanation as to why they are important to our military and civillian personnel in conflict areas. This is a must read.

The LA Times has more on yesterday’s Frist and Hastert keystone cops investigate the GOP moment.

At least one Senate Republican agreed. Asked whether he thought there should be a probe of the existence of the prisons, or of the leak of classified information about them, Sen. Lindsey Graham of South Carolina rolled his eyes and replied: “How about both? I’d like to know why we’ve got secret prisons and what oversight precautions we have.”

It is “imperative we regain the moral high ground,” he said. “And having secret prisons come out in the Washington Post is not a good way to regain it.”

Good to know someone on the Republican side understands that the actual torture might be more damaging than everyone finding out about it.

Although it sure would have been nice if Graham hadn’t followed up his quote by doing this. Talk about an attempted end run on a Supreme Court decision that hasn’t even happened yet. Apparently, it’s due process, schmoo process for the Rethugs again. Shameful. (Hat tip to Jeralyn on this one.)

Quick, get out those checkbooks. You, to, can contribute to the Scooty Poot Defense Fund. Erm…not so much. Does kind of put the Preznit’s supporters in an odd bind, though, depending on Libby’s defense strategy — are they paying him to keep his mouth shut, or to expose the dirty underbelly of the Cheney camp — or both?

The Boston Globe has a lovely story about GOP infighting over the agenda. Couldn’t happen to a more deserving group of skeezy asshats. (Hat tip to reader bkny for the link.)

Then there is this piece, claiming that Susan Ralston, Rove’s personal assistant, is being called before the Fitzgerald grand jury again. Gee, that sure doesn’t sound like an investigation that is anywhere near being over, now does it? Wonder if her ties to Abramoff and that pending investigation are helping to loosen up her testimony a bit? Ahem. (Hat tip to reader jbalazs for the link.)

(Photo above can be purchased as a poster here. Gorgeous work — but I can’t find a name to credit. If anyone knows the photog, please let me know.)

UPDATE: And isn’t this interesting. Not content to try and manipulate the American public, the WH is now trying to force media outlets into helping them outright lie. ThinkProgress is on this in a big way.

“Um…hello, White House? If you are going to lie, try doing it when proof that you are lying isn’t caught directly on video.”

UPDATE #2: Laura has much more on the torture issue. This one is a must read.

UPDATE #3: Mwahaha. TalkLeft has done the digging on the Swift Boat attempt of Amb. Wilson by Hannity and pals. And the facts don’t add up. Surprise, surprise. eRiposte has more on LeftCoaster as well. Oh man, first Frist, then this. Karma can be a bitch.

UPDATE #4: Speaking of Typhoid Dubya…Crooks and Liars has the video up of J.D. Hayworth’s Imus appearance this morning.

BREAKING: Simultaneous attacks today on the Hyatt, Raddison and Days Inn hotels in Amman, Jordan. More from the AP here.