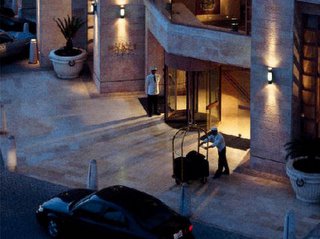 BREAKING news on simultaneous attacks on three hotels in downtown Amman, Jordan — the Grand Hyatt, the Days Inn, and the Raddison.

MSNBC reporting that two of the bombings in Jordan occurred with suicide bombers walking into the Days Inn and Raddison hotels. This is the first report of suicide bombers in Amman, according to MSNBC.

These are popular tourist hotels, with lots of packages using them for travel to and from Petra and other locations in Jordan. MSNBC is reporting that there have been reports of threats toward US tourists in Jordan over the last few days, and that this is not a hallmark of al Queada, usually, but that no group has yet claimed involvement.

According to NBC analyst, Roger Cressey, the Jordanian intelligence unit is quite good, and these hotels had previously been targets by jihadists during the Millenium celebrations and on ohter occasions. There is also a report that one of the hotels had a bomb planted in a ceiling panel, again from an analyst on MSNBC.

More news as we get it.

Reuters is saying 18 killed. MSNBC’s translater reporting 25 deaths. The NYTimes via AP has some basic information.

Roger Cressey on MSNBC is reminding viewers that there was a plot disrupted in Australia this week as well, and that this is a thread that intelligence agencies will be trying to pull over the comings days.

(Photo above the Grand Hyatt in Amman on a much better evening. According to the AP, this beautiful stone facade was destroyed.)

UPDATE: Steve Emerson on MSNBC reporting that the attack at the Raddison is said to have occurred when a suicide bomber walked into a wedding party at the hotel and detonated himself. This is where the bulk of the casualty numbers have come from thus far, according to Emerson’s Jordanian sources. The Days Inn bomb was also a suicide bomber who is reported to have detonated the bomb in the lobby of the hotel.

UPDATE #2: The NYTimes via AP is now reporting at least 53 dead and more than 300 wounded in the attacks.