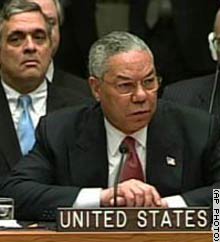 Here’s something that’s always troubled me:

When Powell gave his presentation at the U.N., he presented the following evidence:

o A tape of two Republican Guard officers discussing how to hide mobil weapons labs.
o Satellite photos of chemical munitions bunkers, indicated by the removal of trucks and materiel in the weeks before IAEA inspections.
o Interviews with an Iraqi scientist attesting to mobil weapons labs on wheels and rails.
o No evidence that their VX nerve gas was ever destroyed.
o Aluminum tubes that were alleged to be parts of centrifuges to create fissionable material.
o A high-ranking Al Qaeda member who alleged a link between terrorists and Saddam Hussein.

The Iraqi scientist was the notorious Curveball, a famed dissembler, alcoholic and con man. Â The Al Qaeda operative is this week identified as a current Guantanamo prisoner who officials knew was Â lying at the time. Â  The aluminum tubes were substituted by Powell at the last minute to replace the Niger-yellowcake connection favored by the President in his State of the Union speech, a claim that was demonstrably false, and the tubes were later identified as rocket fuselages with no connection to uranium. Â The VX nerve gas was apparently destroyed, unless of course Saddam Hussein is still saving it for when he really needs it. Â And the movement of of trucks, etc. prior to weapons inspections, according to chief inspectors Blix and ElBaradei, could easily have occurred in the normal course of business, and in no way suggest the presence of chemical over more traditional weapons.

That leaves the high-level surveillance tape, compared at the time to “something out of Beckett.”

Yet in February 2003, when the U.N. presentation occurred, the local Pacifica affiliate contained an interview with a correspondent in Baqhdad, non-embedded, who watched the live broadcast of Powell’s speech with a room full of Republican Guards. Â When the tape of the intercepted phone conversation was played, widespread laughter erupted in the room. Â The accents employed by the alleged Iraqi officers were so geographically inappropriate — attributed by the actual Guards as either Saudi or Jordanian — that the immediate effect was comical. Â I don’t recall the reporter and can’t identify him now. Â But with all the other pretexts for war now being identified as ill-considered at best and fraudulent at worst, this experiment is easily reproduced: Â Play the tape for a selection of Iraqi sources and have them identify where the speakers are from. Â If the result is as described, this would seem more of a smoking gun than possibly even forged memos: Â Somebody recorded fake audiotapes and couldn’t even be bothered to cast the right nationalities — or else couldn’t tell the difference.

The clip itself is here, it’s the third clip, labeled “Modified Vehicle.” If anyone knows someone out there with a knowledge of Iraqi dialects who isn’t presently in some CIA black ops prison camp and could review the tape, we’d certainly love to hear about it.