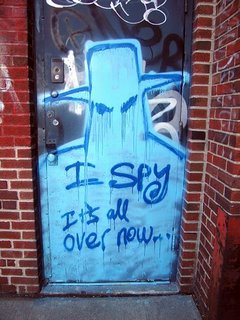 Without Queen Rove to spoon feed them their talking points, the wingnut borg have ceded control of the tom-toms to the tin foil hat brigade. Dig it: Joe Wilson was a French spy. No, really:

Enter our hero, Joseph C. Wilson, from stage left. The French forgery about Niger led straight to Wilson’s bogus trip to Africa. Wilson supposedly went there to find out the truth for the CIA. But every government involved already Ã‚Â knew the truth about the bogus document, because it showed incorrect names of Niger officials. A single telephone call to Niger would have established that fact.

How exactly this is helpful to any cogent argument is open for speculation. I guess when you can produce reptilian brain rage just by stringing the words ‘French”, “Joe Wilson” and “CIA” together in a paragraph, any attempt at erudite logic would be overkill.

And now Sean Hannity is dragging out some old GOP war horse named General Paul Vallely, noteworthy only for a conspicuous silence on the matter up until now, to claim that Joe Wilson was jabbering to him about how his wife worked for the CIA in the spring of 2002 while they were both in the green room at Fox News. Never mind that Joe Wilson never appeared on Fox News until July 2002. Vallely has now changed his story to accommodate this discrepancy. Apparently this is supposed to make him more plausible, since if his intent was to lie he would’ve checked his dates first.

They may have to run the one about how an inconsistent story makes it more plausible past me a few times before it starts to make sense. The only salient commentary I found on the whole situation came from the comments at Tom Maguire’s: “One thing’s for damn sure: this Plame/Wilson leak thingy is way too complicated for Sean Hannity to understand.”

Update: Crooks & Liars spoke to Joe Wilson today, and evidently a team of Swift Boaters is being assembled: Fox veteran Lt. General Tom McInerney seems to be another graduate of the Roseanne Barr School of Repressed Memory Recovery. Maybe they should offer up Pell Grants to everyone appearing before Fitzgerald’s grand jury, this thing seems to be spreading faster than the Bird Flu.

Update 2: Digby has a must-read backgrounder on McInerney and Vallely: “These two men specifically are Jack D. Ripper and Buck Turgidson come to life. I think Pat Fitzgerald needs to talk to them. Immediately. “