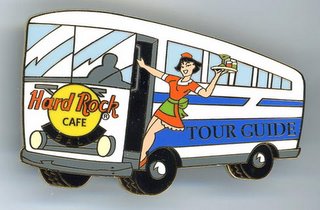 During a whirlwind tour of DC that includes sit-downs with Condo, Hadley, Big Time and Snow, Ahmed Chalabi probably doesn’t have a moment to steal. But just in case anybody decide he’s way too toxic for a high profile grip’n’grin this political season, Arianna helpfully provides an alternate itinerary. Her first stop:

FBI Headquarters. Chalabi is currently under investigation, suspected of telling the Iranian government that America had broken the code it used for secret communications — an offense the administration said could â€œget people killedâ€. When this information came to light 17 months ago, Condi Rice promised a criminal investigation of the charges. But close to a year and a half later, the FBI has still not questioned Chalabi. Now seems like a perfect time. Condi can walk him over to the Hoover Building after their meeting and make all the necessary introductions.

Arianna’s tour also includes US Congress (at least the Senate Select Committee on Intelligence), the NYT Washington bureau, and Arlington National Cemetery — it’s always fun to admire your own handiwork, no?