The Circus is Coming to Town 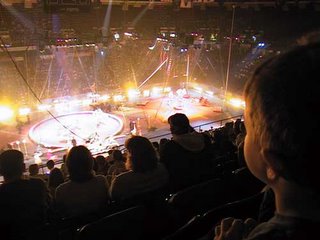 New article in the WSJ outlining a plausible Scooter defense — journalists have bad memories. I for one hope he goes with that. Both Jeralyn and Emptywheel have really good analyses of the article, but even a casual observer of Plameology is certainly rubbing their hands together with glee that the most vulnerable journalist in this case, Judith Miller, is also the one that Scooter was feeding bogus info to during the lead up to the Iraq war.

Judy knows where the bodies are buried. It’s going to be damned near impossible to slam someone in court like Judy, who can’t hear a single word uttered against her in the Times without flying into a tailspin, and hope that she doesn’t decide to flush the whole damn lot of them down the shitter. While a jury may be forced to sit and listen to your attorney spin for days on end, those stories would leak out to the American public who are not subject to such captivity and take on a life on their own. It could get really, really interesting.

Pinch has been trying hard to find some way to silence Judy and hide the NYT’s own complicity in this manner. But given how closely this line of attack on Judy’s credibility aligns with the crime at hand, it will be very difficult to claim First Amendment privilege to shield this information. Moreover, Judy never wrote a story on this matter, Libby, better than anyone, is likely to be able to paint Judy’s involvement as a malicious actor and not a journalist.

A trial like this will pit the White House against Judy Miller. It does not bode well for Libby that the fulcrum will be his own, extremely vindictive super-shill.

The Circus is Coming to Town