And Rove Still Has His Security Clearance Because…??? 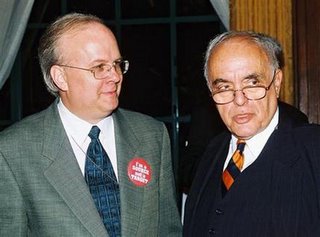 The questions about Karl Rove’s security clearance have left the blogosphere and entered the main stream in the last couple of weeks — and today in a big way in the LA Times. About damn time, I say.

An intelligence analyst temporarily lost his top-secret security clearance because he faxed his resume using a commercial machine.

An employee of the Defense Department had her clearance suspended for months because a jilted boyfriend called to say she might not be reliable.

An Army officer who spoke publicly about intelligence failures before the Sept. 11 attacks had his clearance revoked over questions about $67 in personal charges to a military cellphone.

But in the White House, where Karl Rove is under federal investigation for his role in the exposure of a covert CIA officer, the longtime advisor to President Bush continues to enjoy full access to government secrets.

So, the little people have to follow the rules — but they don’t apply to Bushie’s Brain, is that it?

“The agencies can move without hesitating when they even suspect a breach of the rules has occurred, much less an actual breach of information,” said Mark Zaid, a Washington attorney who has represented more than three dozen intelligence officers in security clearance cases, including those cited above.

If Rove’s access to classified information were taken away, it would prevent him from doing much of his job. His wide portfolio includes domestic policy and national security issues, and he is at the president’s side often during the day.

Ahhh, okay. I see. Having to follow the rules would be inconvenient for the Preznit and his Brain. Well, we can’t have that, now can we? I mean, why should the Chief Law Enforcement Officer of the nation, along with his Deputy Chief of Staff have to actually follow the laws they have sworn to uphold? Ahem.

A former White House official described going to a conference room in the Old Executive Office Building soon after joining the staff to watch an instructional video and get in-person training from federal agents who emphasize the need to take care with secret information. The former official was warned not to discuss any classified information learned on the job with those outside the complex who might not have the same clearance.

Each employee was asked to sign the nondisclosure agreement after the training and given a booklet explaining the rules, which include prohibitions against providing classified information â€” or even confirming it â€” to reporters.

A briefing booklet typically given to government employees when they receive their security clearance states that an official cannot confirm information that is classified, even if it has been published in a newspaper article.

Maybe paying attention to sensitive materials training information was beneath Rove? It sure looks like enforcing the standards required is beneath his boss.

Intelligence experts and even some prominent conservatives say that the fate of Rove’s security clearance should not depend on Fitzgerald’s conclusions â€” and that the White House should err on the side of caution rather than on technical questions of Rove’s legal culpability.

“This president, who has raised to the top of the priority list the issue of national security, certainly should be concerned if any evidence has been developed that would indicate misuse of classified information by any member of his team, certainly somebody as high as Mr. Rove,” said Bob Barr, a former Republican congressman from Georgia and a former CIA official and federal prosecutor.

Barr said the Justice Department should examine Rove’s actions, apart from the Fitzgerald probe, to determine specifically whether Rove’s security classification should be stripped.

I am no fan of Bob Barr’s, but he is absolutely right here. Security clearance should not be dependant on political patronage — it is too important to be left to the political folks for decision-making. If this had been anyone but Rove, that clearance would have been gone close to two years ago.

Just more evidence that in the Bush White House, the rules only apply to everyone else.

And Rove Still Has His Security Clearance Because…???