Ya Gotta Have Friends 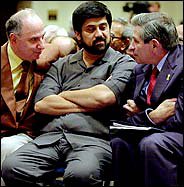 Laura Rozen says that Newt Gingrich’s appearance on ABC’s This Week gives us a good indication of what we’ll soon be hearing from Pat Roberts about the Phase II investigation of the SSCI — namely, “Roberts will leak to the White House and the GOP the pre-war statements by Democrats about the threat posed by Saddam Hussein.”

Let me cancel my manicure. Wouldn’t want to risk being out of the house for that one.

But as Laura says, this leaves out a few critical point the committee previously agreed to cover, namely “the use by the intelligence community of information provided by the Iraqi National Congress (INC).”

Might we suggest that the committee take advantage of that wonderful piece of kismet, the fact that Ahmed Chalabi is going to be hitting DC this week, to ask him a few pointed questions? Maybe he can carve out some time in between admiring Condi’s shoes and swapping the finer points of waterboarding with Big Time to let them know how cousin Curveball fares these days.

Ya Gotta Have Friends