The Crumbling Moral Authority of the Left 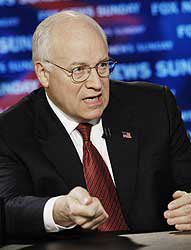 Shocking many of us who have long argued against the use of torture under any circumstances, noted liberal blogger TBogg has come out in support of Vice President Dick Cheney and his plea to Republican senators to allow CIA exemptions to a proposed ban on the torture of terror suspects in US custody.

There is nothing less than our precious freedoms at stake here, and when push comes to shove, we shouldn’t let quaint antiquainted notions about human rights take precedence over our freedom from fear and harm when it comes to those who would attack us or who pose a danger to our men and women in uniform or the others who serve our country in covert ways through our intelligence services.

Therefore I think we should torture Scooter Libby.

TBogg leaves the rest of us weak-kneed sob sisters in his wake with the power of his logic:

[I]f we are going to get to the bottom of who put an American CIA agent in jeopardy, it is incumbent upon us to torture Scooter.

Water board him, strip him naked and smear him with his own feces and walk him on a leash down the mall, beat him with rolled-up copies of Condolezza Rice’s unread National Intelligence Estimates, keep him awake for hours on end while reading to him from James Lilek’s new book, Cute Things Gnat Said While I Was Lurking Around the Bra Department At Target, until he tells us who tipped him off about Valerie Plame.

A secure America demands no less.

We might want to smack Karl Rove around too. That fat prick knows something.

My resolve falters. I admit it, he’s convinced me.

Update: John over at Crooks & Liars has an interview up with Wes Clark who talks about torture and the moral authority of the left. With a bit more gravitas than TBogg.

Update: Atrios sends us to a Newsweek piece on Dubya’s “series of covert directives” to use “new, harsher methods” of interrogation that lead to the crap intelligence derived from al-Libi.

The Crumbling Moral Authority of the Left