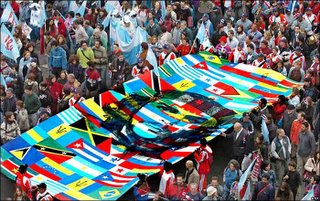 Remember what a love fest Bubba had in South America? Well history isn’t repeating itself for Poor Hapless Dubya, who tried to flee DC in the wake of Hurricane Patrick and finds no shelter from the storm in Argentina. Reader zaba sends this email:

Regarding the demonstrations and melees in Buenos Aires and La Plata today -Â Â 98 percent of the Argentine population was against the invasion of Iraq. For weeks prior to the summit, there have been numerous articles and commentaries Â in the Argentine media regarding the deepÂ feelings ofÂ animosity towards George W. Bush.Â It hasÂ not been reported in the U.S. media thatÂ BushÂ traveled to the summit with a retinue of 2000 (yes, two thousand) security/staff.Â Â Last week, according to the daily Clarin, 3 airplanes loaded with arms for security as well as food for the entourage arrived in ArgentinaÂ Â  Also,Â Â fourÂ AWAC spy planes are surveying the area. Sikorsky helicopters were transported to Argentina, U.S. navy shipsÂ have been deployedÂ off the coast of Mar del Plata, Â all in anticipation of unrest due to the unpopularity of Bush in Argentina and in all of Latin America. The size of the Bush security detail has been a topic of articles in Argentina. It did not merit a single mention in the U.S. media. I find it incredible. Â One cannot help but wonder what the price tag will be for the Bush trip to Latin America.

You do have to marvel at the expense of this particular photo op whilst Congress is simultaneously pulling food out of the mouths of the poor.

There is some nasty-ass karma cooking up for ol’ Dubya. The man’s got telltale hearts beating everywhere.