We Don’t Call It “TraitorGate” For Nothing 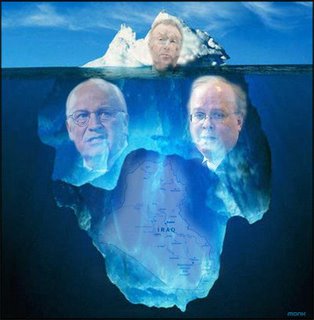 Ooooh, John Dean has a barn-burner of a column up, and there ain’t no fat lady singing, that’s for sure. Gee thee behind me, Dick Cheney:

Having read the indictment against Libby, I am inclined to believe more will be issued. In fact, I will be stunned if no one else is indicted.

Indeed, when one studies the indictment, and carefully reads the transcript of the press conference, it appears Libby’s saga may be only Act Two in a three-act play. And in my view, the person who should be tossing and turning at night, in anticipation of the last act, is the Vice President of the United States, Richard B. Cheney.

Dean goes on to note, as Billmon has, that Fitzgerald said a whole lot more in the indictment than he had to, and took great pains to delve into the statutes under which Libby is not charged.

What is Title 18, United States Code, Section 793? It’s the Espionage Act — a broad, longstanding part of the criminal code. (my emphasis)

We have not charged him with [that] crime. I’m not making an allegation that he violated [the Espionage Act]. What I’m simply saying is one of the harms in obstruction is that you don’t have a clear view of what should be done. And that’s why people ought to walk in, go into the grand jury, you’re going to take an oath, tell us the who, what, when, where and why — straight.

Fitzgerald can’t do his job because Libby is lying to him. And once again as Dean noted on Countdown last week, he says Libby is acting as a firewall to Cheney:

[I]n Fitzgerald’s words, Libby’s story was that when Libby “passed the information on to reporters Cooper and Miller late in the week, he passed it on thinking it was just information he received from reporters; that he told reporters that, in fact, he didn’t even know if it were true. He was just passing gossip from one reporter to another at the long end of a chain of phone calls.”

This story is, of course, a lie, but it was a clever one on Libby’s part.

It protects Cheney because it suggests that Cheney’s disclosure to Libby was causally separate from Libby’s later, potentially Espionage-Act-violating disclosure to the press. Thus, it also denies any possible conspiracy between Cheney and Libby.

And it protects Libby himself – by suggesting that since he believed he was getting information from reporters, not indirectly from the CIA, he may not have had have the state of mind necessary to violate the Espionage Act.

Thus, from the outset of the investigation, Libby has been Dick Cheney’s firewall. And it appears that Fitzgerald is actively trying to penetrate that firewall.

Dean goes on to speculate, and I agree, that Fitzgearld is trying to flip Libby, and thinks he is unlikely to do so:

Neither Cheney nor Libby (I believe) will be so foolish as to crack a deal. And Libby probably (and no doubt correctly) assumes that Cheney – a former boss with whom he has a close relationship — will (at the right time and place) help Libby out, either with a pardon or financially, if necessary. Libby’s goal, meanwhile, will be to stall going to trial as long as possible, so as not to hurt Republicans’ showing in the 2006 elections.

So if Libby can take the heat for a time, he and his former boss (and friend) may get through this. But should Republicans lose control of the Senate (where they are blocking all oversight of this administration), I predict Cheney will resign “for health reasons.”

I’m not sure I’m with Dean on this last one. As long as Libby stalls a trial, it stays in the headlines. The public hunger for answers will grow ravenous. The White House will have to play Pin It All On Scooter, which his attorneys will be forced to defend in the court of public opinion. And the press, against whom Libby will have to wage his war (it’s going to be his story vs. those of Matthews, Cooper, Miller et. al.) is going to turn hostile.

The stage is set for a circular firing squad.

And then there’s the yet-to-be-played-out Karl Rove saga. BushCo. would love to see Scooter out of the headlines as quickly as possible so they could get back to feeding like pigs at the public trough. A few lavishly expensive photo-ops are not going to steal the headlines back from this one any time soon.

We Don’t Call It “TraitorGate” For Nothing