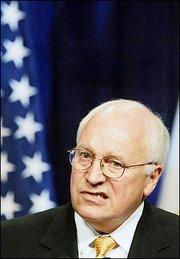 Well, I’ll say this about Lawrence Wilkerson — he’s definitely off the Cheney Christmas card list. But he just made mine — in spades. In fact, he may have just earned himself a tin of homemade cookies and candies.

Today’s Froomkin column (man, he’s indespensible, isn’t he?) points to an NPR audio file of Lawrence Wilkerson’s Thursday interview on the network, and it is explosive, detailed and did I mention scorching?

The interview was conducted by NPR’s Steve Inskeep. Although the transcript is not publicly available, Froomkin provided some quotes on the subject of Cheney’s office being the catalyst for the change in military policy regarding torture.

“INSKEEP: While in the government, he says he was assigned to gather documents. He traced just how Americans came to be accused of abusing prisoners. In 2002, a presidential memo had ordered that detainees be treated in a manner consistent with the Geneva Conventions that forbid torture. Wilkerson says the vice president’s office pushed for a more expansive policy.

“Mr. WILKERSON: What happened was that the secretary of Defense, under the cover of the vice president’s office, began to create an environment — and this started from the very beginning when David Addington, the vice president’s lawyer, was a staunch advocate of allowing the president in his capacity as commander in chief to deviate from the Geneva Conventions. Regardless of the president having put out this memo, they began to authorize procedures within the armed forces that led to, in my view, what we’ve seen.

You know, how hard can it be to sit your ass down and think, “Hey, wouldn’t it be a good idea to find someone to work in my office who doesn’t come with an ethical taint — maybe start fresh — since my Chief of Staff just got indicted and all.” Must be difficult, I suppose. Especially when all your chums seem to favor torture and drumming up a war out of thin air, well paid intelligence sources and specially forged documents.

“INSKEEP: We have to get more detail about that because the military will say, the Pentagon will say they’ve investigated this repeatedly and that all the investigations have found that the abuses were committed by a relatively small number of people at relatively low levels. What hard evidence takes those abuses up the chain of command and lands them in the vice president’s office, which is where you’re placing it?

“Mr. WILKERSON: I’m privy to the paperwork, both classified and unclassified, that the secretary of State asked me to assemble on how this all got started, what the audit trail was, and when I began to assemble this paperwork, which I no longer have access to, it was clear to me that there was a visible audit trail from the vice president’s office through the secretary of Defense down to the commanders in the field that in carefully couched terms — I’ll give you that — that to a soldier in the field meant two things: We’re not getting enough good intelligence and you need to get that evidence, and, oh, by the way, here’s some ways you probably can get it. And even some of the ways that they detailed were not in accordance with the spirit of the Geneva Conventions and the law of war.

“You just — if you’re a military man, you know that you just don’t do these sorts of things because once you give just the slightest bit of leeway, there are those in the armed forces who will take advantage of that. There are those in the leadership who will feel so pressured that they have to produce intelligence that it doesn’t matter whether it’s actionable or not as long as they can get the volume in. They have to do what they have to do to get it, and so you’ve just given in essence, though you may not know it, carte blanche for a lot of problems to occur.”

AFP provides even more information on the interview, including the fact that Cheney’s office became involved in this before we went into Afghanistan. (My question of the day: did Cheney help to hand-pick Gen. Miller for the torture patrol? Shouldn’t the media and the Senate Armed Services Committee start asking that — right now?)

And that the orders and directives coming from the VPs office on torture directly contradicted a 2002 memo from the Office of the President.

You know, back in the old days, we made fun of Alexander Haig for pretending to be President after Reagan was shot. Cheney isn’t even bothering to pretend.

One of the more disturbing aspects of the interview, and something covered by the AFP article, is this:

He said National Security Council staff stopped sending emails when they found out Cheney’s staffers were reading their messages.

He said he believed that Cheney’s staff prevented Bush from seeing a National Security Council memo arguing strongly that the US needed far more troops for the March 2003 invasion and occupation of Iraq.

We’ve known for some time that there was a substantial fight between the CIA and the WHIG group. But nothing like this. Read that section again — the NSC staff stopped sending e-mails between themselves because members of the VP’s staff were spying on them. What in the hell is going on with these people?!?

Meanwhile, in Congress, despite passing by an overwhelming margin of 90 to 9 in the Senate, McCain’s anti-torture provision is being blocked by Dick Cheney’s good friend in the House, Denny Hastert. I didn’t think it was possible, but these asshats have sunk to an even lower level of hackery and ethical depravity.

The saving grace for my mood is that Cheney appears to have left a big, slimy trail — and Powell and Wilkerson have both taken some excellent snapshots of it. Now if only someone in DC had to cojones to do some oversight. *snerk* Oh, that was painful.