Can’t Even Be Honest With Each Other 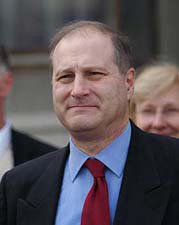 Doug Jehl of the New York Times is reporting this morning that Eric Edelman fudged the truth in response to a questionnaire sent by the Senate Armed Services Committee. And Sen. John Warner, chairman of the committee doesn’t sound at all pleased.

Eric S. Edelman, an under secretary of defense and former deputy national security adviser to Vice President Dick Cheney, “would have been well advised” to tell Congress this spring about his “involvement” with the investigation into the C.I.A. leak case, the chairman of the Senate Armed Services Committee said in a statement on Thursday.

What does it say when you can’t even be honest with members of your own party about how things are going with the Traitorgate mess?

Let’s see, didn’t John Bolton try a similar tactic with his questionnaire and the Foreign Relations Committee, before also receiving a recess nod to the United Nations? Can you say utter disrespect of the Senate — and a great way to piss off a lot of people with big egos and long memories that really Bushie needs now that his poll numbers have tanked? Ahem.

As under secretary of defense for policy, Mr. Edelman holds one of the most senior positions in the department, a post previously held by Douglas J. Feith. Mr. Bush nominated Mr. Edelman on March 31, 2005, but his appointment was blocked by Senator Carl M. Levin of Michigan as part of a dispute unrelated to Mr. Edelman over the release of documents on Iraq that Mr. Levin had sought.

Mr. Bush used his appointment powers to install Mr. Edelman in the position on Aug. 9, when the Senate was in recess. Mr. Edelman faced only a cursory hearing from the Senate committee, on June 29, and he was not asked about his work for Mr. Cheney or any involvement in the leak investigation. He addressed those issues only in a letter to the committee on May 18, in response to a standard written questionnaire required of all nominees.

More of that exceptional oversight work from the Republicans in charge, I see. Good to know they are thoroughly vetting people for important positions, isn’t it?

Asked in the 20-page questionnaire whether he had ever been “investigated, arrested, charged or held by any federal, state or other law enforcement authority for violation of any federal, state, county or municipal law, regulation, or ordinance,” Mr. Edelman answered no.

Ooops. Wonder what the meaning of “no” is in that context? Ahem.

If I were Mr. Edelman, whose position requires him to brief members of the Armed Services Committee pretty frequently, I’d take along some kevlar to my next committee appearance. Just be sure it isn’t one of those kevlar vests that still hasn’t been distributed to National Guard troops in Iraq — that would just be tacky.

UPDATE: Have I mentioned today that Digby rocks? No? Well, Digby rocks!

Can’t Even Be Honest With Each Other