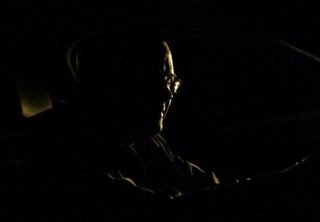 Is the noise on removing Rove getting louder? Jane’s excellent review of the WaPo article on the subject is below. And now, the exceptional Dan Froomkin has more on the subject in his WaPo White House Briefing.

So faced with an increasingly festering problem, there are signs that some blood-letting may be in the cards.

And that’s just for starters. Froomkin includes a link to a letter from Sen. Reid and Rep. Pelosi calling for Rove to be fired.

“With three years remaining in your term, we believe it is imperative that you move quickly to remove the cloud that hangs over your presidency,” they wrote.

“It is totally unacceptable that anyone involved in the unauthorized disclosure of the identity of a CIA officer, including your Deputy Chief of Staff, Karl Rove, should remain employed at the White House with a security clearance.”

Hmmmmm….Democrats and Republicans can sometimes agree on things, it seems.

There are some excellent article summaries and links in Froomkin’s blog today — it’s a must read, as always, and today is truly an exceptional column. Great stuff!

Mark Kleiman also has more on the “Rove should get out” meme, concentrating on the McClellan angle and the increasing gap between the interests of the different factions within the WH. My favorite bit:

So to discuss the quarrel between Rove and McClellan as if it were merely a personal spat, to be resolved by dumping whichever of the disputants is less valuable to the organization, is to leave out entirely the difference between right and wrong.

I have to say, watching the maneuvers from the outside is awfully amusing — especially given the asshats who are rushing around to stab each other in the back to save their own political skins.