Hey, I Know, Just For Kicks, How About We Actually Try Doing Our Job? 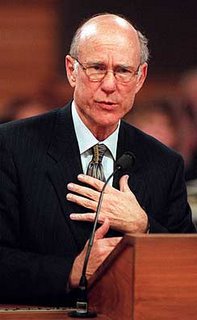 Yesterday’s Senatorial Smackdown was seriously entertaining television, what with the indignant Bill Frist whine-a-thons, and the GOP spin camps set up outside the Senate chambers within minutes of Sen. Harry Reid’s outflanking rules maneuver under the archaic Standing Rule 21. (And does anyone else sense Sen. Byrd’s hand in the planning of this? Thank goodness someone reads the rules now and then.)

Dana Milbank’s Washington Sketch column in the WaPo provides an amusing glimpse into the personalities behind the scenes of the serious discussion yesterday.

And, may I say, it’s about damn time — I spoke with Sen. Rockefeller over a year and a half ago regarding some of these issues and how stymied he and the Democrats were on the Intelligence Committee in getting any decent oversight going. He was attempting to be very vague and polite in his discussion with me, but his anger over a number of issues that I brought up regarding matters that needed oversight was visibly clear — not just from him, but also from staffers who were with him at the time.

The Intelligence Committee has had a long tradition of nonpartisan action on these issues, because action on national security matters and intelligence issues had always been about what was best for the nation as a whole. Guess that’s gone right out the window — not a surprise given Pat Roberts history of partisan activity and this Administration’s view on anyone asking tough questions about anything they do.

Too bad for him the Democrats appear tired of trying to go along to get along.

Democrats did not deny it was a stunt: a brazen effort to change the subject from the Supreme Court confirmation of Sam Alito, which Republicans prefer, to war deaths and Scooter Libby’s indictment. “Alito had his day,” a Democratic leadership aide said as the chamber dissolved into confusion. “We’re going back to our story.”

It was a cheap trick — and it worked brilliantly. Reporters dropped their stories about Alito and covered the melee in the Senate. CNN titled the episode “Congress in Crisis.” MSNBC displayed a live shot of a mostly empty hallway outside the Senate chamber and a clock showing elapsed time since the Senate went into closed session.
Republicans knew they were licked. They agreed to set a schedule for the long-delayed intelligence committee investigation Democrats demanded. “Today, the American people had a victory,” Reid declared.

Cheap trick my ass — this was a brilliant maneuver and it was executed flawlessly. And they achieved exactly what they wanted — changing the subject back to the fact that the Republicans in Congress haven’t been doing their jobs, that the Administration has had a free pass far too long, and that Pat Roberts was aiding and abetting them all along.

The Republican response? Well, Sen. Frist appeared to be personally insulted. (Maybe he should diagnose his mental state today by watching footage of himself from yesterday. Mweee hee. Sorry, couldn’t help myself.) And then there was this:

Let me get this straight? The fact that the Republican chairman of the Intelligence Committee has been stimying real oversight into potentially jimmied and forged intelligence foisted on the American public and the Congress in order to drum up a war in Iraq which has cost more than 2,026 American lives and counting (not to mention injured soldiers), didn’t bother you one bit.

But Kit Bond’s lunch was disturbed because his party was called on their rubber stamping?!? THAT upsets his lunch?!?

How about this for a concept? How about the folks in Congress start actually doing their jobs — even the Republicans — instead of allowing Dick Cheney and his little band of cronies to tell them what to do. After all, the Executive Branch and the Legislative Branch are supposed to be separate and distinct. It’s called “checks and balances” for a reason — we aren’t a damned monarchy.

Hey, I Know, Just For Kicks, How About We Actually Try Doing Our Job?